Dumber than Doom, funnier than Half-Life, stranger than Painkiller. 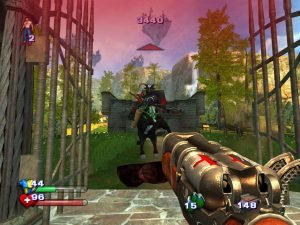 Few people know that the template for Serious Sam – a buzzcut, tanktop-wearing badass with a big gun – was actually Duke Nukem from then vaproware title Duke Nukem Forever. Developer Croteam swore this wasn’t the case, but they received a lot of grief over certain troubling resemblances between the shirts worn by the heroes of their respective games. Understandably deciding it had bigger fish to fry, Croteam quietly backed down and went on to create the original Serious Sam, a popular title with a superior engine to anything on the market, while Duke Nukem made like a tree and disappeared forever.

Serious Sam Stone appears to relish the prospect of inheriting the solipsistic Duke mantle of tough guy vs.hoards of aliens, if only to improve on it. In fact, once you get to play through the dumb but fun levels of Serious Sam II, you’ll probably end up asking yourself “Duke Who?”

For a product whose sole object is to squash and mince you, itâ€™s all love. And itâ€™s hard, but not stupid hard like before. In the original two games (the creatively named “First Encounter” and “Second Encounter” were either too hard on the lowest difficulty and way too hard on the middle ones. The balancing issues weren’t noticeable when you faced a few dozen monsters, but when charges turned into stampedes, the game just didn’t work. Fortunately, Serious Sam 2 tries to fix this, and it ends up being less frustrating as a result.

Exuberance literally screams from every frame, in blazing swashes of color and fury including, but not limited to, the cascades of flowers you can once again substitute for blood. Whereas other recent high-profile shooters proudly flourished 900 variations on lightless corridors festooned to the rafters with steam-wreathed pipes, misty ducts, and faintly smoking gratings, all golf-clappably rich in detail and uniformity, Serious Sam lovingly shrivels your retinas to raisins with vibrant, fully destructible environments that look nothing alike, or like anything youâ€™ve seen. Simply put, Serious Sam II just feels alive.

Croteam has elected to respond to this challenging dismissal of their casual brilliance in two keys: charging more than $20 a copy this time out, and creating the best graphics engine ever. The game plan is to optimize Serious Sam IIâ€™s engine to within an inch of its life until itâ€™s able to present an unthinkable number of characters on screen with no loss in frame rate, and theyâ€™re doing it. Volumetric lighting, bloom effects, precision pixel shading, richly detailed textures, and a new system of bump-mapping are all being put at the service of creating the largest shooting gallery ever pre-rendered.

In addition to the editor and the engine Croteam hoped to make a fortune licensing out, Serious Sam II also comes with an actual game attached. Although a direct sequel to the â€œeventsâ€ depicted in the first two titlesâ€”which Croteam sees as a single game that deadlines of the moment forced them to split up, Kill Bill styleâ€”Serious Sam II features a much beefier storyline complete with cheerfully goofy cutscenes detailing cheerfully goofy interplanetary mission objectives. It includes 24 levels â€” plus some â€œsecretâ€ ones â€” strewn over seven episodes set in seven uniquely distinct environments. In theory, it should provide more gameplay hours than the first two Sam â€œencountersâ€ combined. Where the first game was pretty stale, Serious Sam II features a variety of topographies, from bucolic tropical islands, swampy marshes, and ridges of sizzling lava to snowy ice fortresses, Chinese cities called Hong Pong whose inhabitants apparently worship King Kong, and even a â€œValley of the Giantsâ€ segment replete with skyscraper-high grass blades.

In keeping with Croteamâ€™s taste for the gleefully deranged, the 42 types of minions Sam squares off against run the strangely consistent gamut of zombie stockbrokers and witches swooping around on rocket-powered brooms and in surprisingly agile floating cauldrons, to gargantuan demons on tank treads with rocket launchers for fists, chicken-legged robot-Walkers with the heads of T-rexes, and sinister clowns who fling delicious but exploding cakes frosted sinisterly with images of your official legal likeness. John Dick officially returns as the voice of Serious Sam, while updated versions of the creepy headless bombers attempt to swarm you.

Needless to say, such a formidable array of interdimensional targets wonâ€™t go down easily, even for someone like Sam Stone who, as you may recall from the first gameâ€™s jewel case, has never lost a battle. Fortunately, along with everything else, Croteam has beefed up Samâ€™s arsenal. In addition to a basic circular saw blade thatâ€™s perfect for dispatching oncoming hordes of monsters and rows of stationary trees alike, Sam also gets grenades, a guided-missile zap gun, a double-barrel super shotgun heftier than Doom 3â€™s BFG, a six-barrel rocket launcher, a minigun, an Uzi (upgraded from the tommy gun), a plasma rifle covered with blue test tubes, a sniper rifle, an upgraded cannon with helpful gauges for both ammo and trajectory, a gun that launches parrot-guided explosives. Although Sam is on foot for the bulk of the game, heâ€™ll be able to man, ignore or destroy a variety of different turret types, as well as get a chance to pilot at least ten different types of vehicles, from speeder bikes to hoverboards, helicopters, planes, and gunboats. Thereâ€™s also a giant ball covered with razor spikes you can climb inside and roll around in, smashing into clusters of monsters which Croteam is deliberately programming to gather in large clusters specifically designed to spice up your rolling rampage.

Even WWII shooter diehards who considered the first Serious Sam too wacky and uncouth to take, um, seriously had to admit that the gameâ€™s engine was stunning. The Serious engine may have been more colorful, versatile, and innovative than Quake IIIâ€™s or Unrealâ€™s, but as the product of Croatian upstarts nobody had ever heard of before, let alone had lunch with, it never really had a fighting chance. Perhaps the scanty $20 price tag of the original game was interpreted as a red flag; best to stay on the safe side and look at mud.