The quintessential ‘shoot everything that moves with really big guns’ type of game.

Serious Sam: The First Encounter comes in a box featuring a beefy guy wearing a muscle shirt and toting a really big gun blasting the living life out of a horde of ugly aliens. And for once in the computer gaming world, what you see is exactly what you get. This inaugural effort from then newbie Croatian developer Croteam is a throwback to the early days of the first-person shooter when “plot” was centered around turning anything that moved into bloody smears. Yet even though Serious Sam is on an evolutionary par with DOOM, and may very well be the neanderthal to Half-Life’s homo sapiens, it doesn’t seem dated in any way. This here is a dose of pure visceral excitement with no strings attached. Thank the crisp visuals to the outstanding Serious graphical engine that allows the designers to throw ridiculous numbers of monsters at the gamer in ultra-large levels. The mob scenes you’ll wade through here are more impressive than anything you’ve seen before. Of course, such massive assaults take precedence over everything else, particularly the plot.

The storyline is equal parts Stargate and Chariots of the Gods, with some nonsense about evil aliens and a time machine giving Sam “Serious” Stone the excuse to wage an assault on E.T. in the dramatic settings of Ancient Egypt. Your only assistance in this one-man war comes from NETRICSA, a computer wired into your brain that keeps track of your objectives, gives tips in certain situations, and analyzes enemies and weapons.

NETRICSA isn’t nearly as useful as the progressively bigger guns that you’ll discover over the course of the game. You start off with a knife and a .45 caliber revolver, but quickly move up to shotguns, a tommy gun, a chaingun, and even a full-fledged 19th century cannon in the later levels. All possess that satisfying “oomph” of the best FPS weapons, meaning that just firing them is strangely fulfilling. From open outdoors to creepy tombs.

Despite the presence of all this firepower, Sam shouldn’t expect a walk in the park. Croteam has designed a legion of bizarre creatures to oppose him. Most are of the “creep you out” variety, particularly the shock troops that consist of headless reanimated corpses. All of them attack in waves, creating what are easily the largest set-piece scraps in first-person shooter history. The scale is unprecedented. To pass through a single courtyard you have to battle at least two dozen Beheaded Kamikazes, which rush at you from all directions simultaneously, screaming loudly (from what orifice we dare not ask).

Hundreds of Marsh-Hoppers swarm into a sealed chamber that won’t open up until every last one has been blasted into green goo. Reptiloids will teleport in one after another atop pillars across an open-air temple in an attempt to stop you from proceeding. Battles like this are often difficult, though they can leave you with a real feeling of accomplishment after you’ve finally emerged victorious. Unfortunately, some of the shine wears off Serious Sam after you reach the midway point of the solo game. The “kill everything” concept starts to drag when you’re forced to slaughter what seems to be never-ending stream of monsters in constricted levels. From this point on, you can’t proceed forward more than a few steps without being ambushed by hordes of charging foes, and it seems the designers have nothing else to show. You can almost hear a little voice in your ear saying “So, you can handle 10 Werebulls, huh? Well, try 25! Bwahahahaha!”

This presents some serious challenges that will keep you hopping, but it also brings the repetitive formula too much to the forefront. It adopts a ‘rinse and repeat’ type of mentality that gets old, even for the diehard twitch gamer. Yet in short spurts it’s an enjoyable offering dressed in exotic clothing. Serious Sam: The First Encounter is one game that no action fan should be without. It’s a dose of pure adrenaline that will perk up old-timers in ways not seen since DOOM hit 386s everywhere in late 1993. 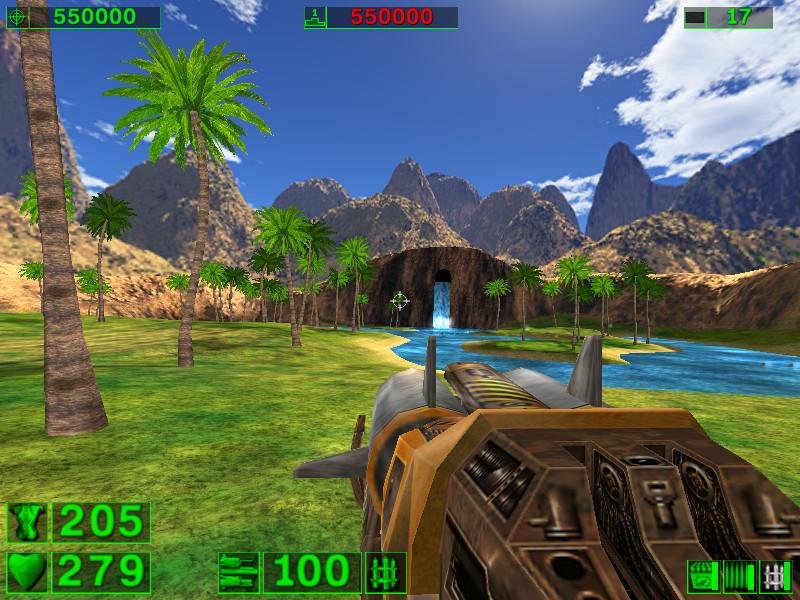