Sensible Soccer 98 is a bit… dated. And not just by today’s standards (you could hardly blame it for that), but by the standards of its own time. The graphics are top down only, with poorly animated players. In many games, it appeared that there were only about three headers played, inconceivable in real soccer. The sound is poor, the announcer atrocious. Control over the players is in line with the rest of the game-in a sports sim world in which the norm is eight-button gamepad control, only two buttons are used here and they don’t offer much more control than “kick” and “tackle”.

You cannot select which player to control on the field, that choice being made for you by the computer. Off-sides, a key strategic element in soccer, appears to have been too much trouble to program into Sensible Soccer ’98. One may pass with impunity to players camped out by the goalie; as the goalies are imbued with little intelligence, once you learn how to steer the ball, rolling a slow shot by them is pretty simple.

There are actually a good number of strategic coaching options, but poor game execution puts these to waste. League and world tournament options are available, but in another what the hell? design decision, world tournaments cannot be saved in progress. The designers must have felt that you would be so engrossed in SensiSoccer 98 that you would be unable to tear yourself away until you had finished hours of play. 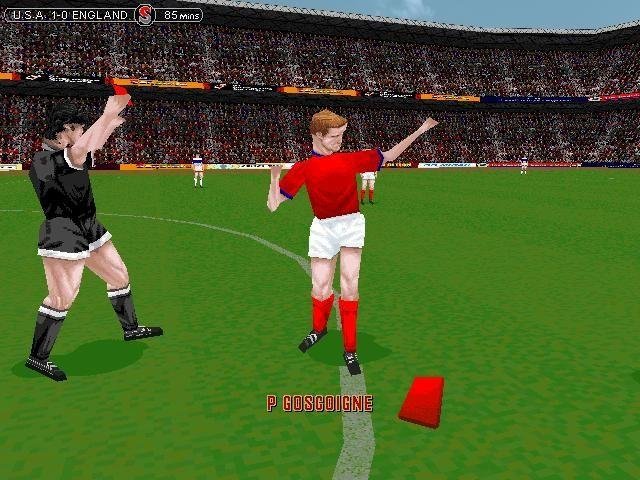