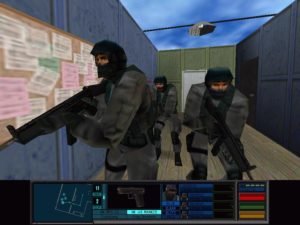 Based on the Clancy novel with the same name, Rainbow Six puts you in command of a fictional counter-terrorist unit fighting against global terrorism. Comprised of members of the best special forces units in the world, this ultra-elite force, colorfully branded “Rainbow”, is the first on the scene whenever and wherever a crisis emerges. Where most first-person shooters would hand you the heavy artillery and expect to blast every bad guy on your own, Rainbow Six throws you into the fray in a realistic team-based setting.

The action, or “fieldwork,” part of the game feels like a cross between Quake and SWAT. You view the world through a team leader’s eyes as you crouch, run, and snipe towards your objective. Other fire teams follow your direction, allowing strategically complex assault plans. The killing, however, isn’t always easy. Doors need to be explosively breached or picked open, rooms flash-banged, and strongholds assaulted from multiple directions to minimize your casualties and maximize the enemy’s. But make no mistake, the difficulty lies not in a superb AI, but rather an ultra difficult damage model – one or two bullet hits, and you’re dead.

The game’s strategic side is offered by the pre-mission planning, which you can skip entirely with default waypoint placements. You have liberty to plan how you, and your co-workers, will neutralize the bad guys. Picking the team, equipping the team, and setting their waypoints and actions brings the title that extra depth of realism that competing games just couldn’t offer. 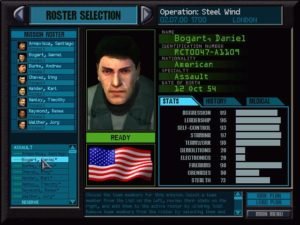 Unfortunately, if there’s one fatal flaw to Rainbow Six it has to be the AI. You can frequently pick off guards in full view of their buddies without them reacting. Even with the default waypoints your friendlies get stuck and keep trying to run through walls an alarming amount of times. The same running-into-walls sort of behavior can often be observed with the enemy. Still, the game is often enjoyable. The missions can be tense and the strategic planning is a joy. Too bad the poor AI and muddy graphics rip some of the joy out of an otherwise clever military-style shooter.