The follow-up to Real War, Rogue States, attempts to correct the interface, AI and gameplay issues present in the first game, also adding new singleplayer and multiplayer modes. Despite the fact Rogue States contains some unconventional and even innovative modes of play, at heart, it’s still a fairly geenric real-time strategy romp. It follows the tried and true formula of resource collection, base construction and fighting the enemy in the open field. 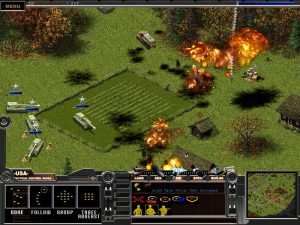 Despite the fact that both sides (US and the Independence Liberation Army) have a few unique units, their arsenals are strikingly similar. On the American side we get an infantry Medic that heals your guys, and a Sniper who can deal death from afar. The Americans will also be able to make use of a Gunship that makes mincemeat of infantry, an Attack Transport that doesn’t require a landing field and a Drone used primarily for scouting. Add a Stealth Bomber that’s almost impossible to detect on radar, an fighter-bomber, and three new base defense mechanisms.

The ILA will be able to counter with some new additions to its own arsenal. They’ll have Medics and Drones just like the Americans, but also have access to an Amphibious Assault Vehicles that able to transport troops across water or land as well as fight any resistance that may be encountered. In addition, the ILA has been given more base defense options than the Americans. They can employ Machine Gun Nests and long-range artillery to counter armor.

While Rogue States is easy to play, many players will be frustrated by the small amount of control they have over their units. Although selecting the unit you want is a snap, actually getting them to carry out your orders is a different matter entirely. They’ve also got inadequate pathfinding from the original game, and can be difficult to navigate through small enclosures..

The artificial intelligence in Rogue States is still basic, and under par with similar strategy games. Basic functions that gamers expect their real-time strategy titles to have can’t be found. For example, in most RTS offerings, when a unit is under fire, it automatically retaliates. Unfortunately, Rogue States’ units often fail to immediately retaliate when fired on. This means that you’ll constantly have to baby-sit your forces instead of counting on them to look after themselves. Rogue States’ AI is also incapable of anything beyond basic tactics. Don’t expect your enemy to send out scouts to find your location and probe your defenses for weaknesses. The AI is much more likely to just throw everything it has at you. If that fails, as it often does, the computer will learn absolutely nothing from its mistake and keep blindly throwing troops at you. With short campaigns, basic AI, limited tactical options and not enough enhancements from the original Real War, Rogue States falls behind as a real-time strategy game when compared to the competition. 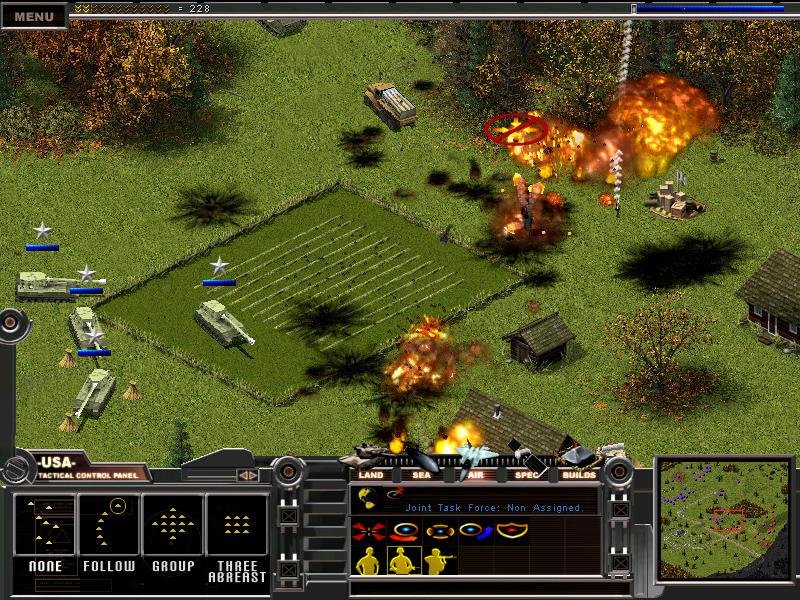