If you’ve never played the original Patrician then you’re not along, since the MS-DOS version never made it across the Atlantic. The sequel covered herein is a full-blown remake of the original, yielding an ultra-deep economic simulation of 14th century trade and commerce in Northern Europe, focusing on the commercial exploits of the Hanseatic League. 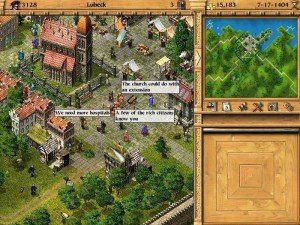 The uninitiated might find the game intimidating, and it takes a bit of playing before you really start to learn the ropes, as it were. In order to get the most out of it, you need to sit down, learn its ins and outs, and suffer a lot of early setbacks while you get familiar with the game’s complex mechanics. It takes a while for things to get interestingâ€”a tad too longâ€”and you may be tempted to throw the game overboard. If you do, then you’ll be missing out on a slick (if complex) game with depth comparable to Strategy First’s Europa Universalis, albeit with less combat and more of a focus on trading and self promotion.

You play the role of a budding merchant in Northern Europe. Your goal is to rise in social status and hopefully become a full-fledged Patrician (one of the big wigs in the Hanseatic League). You begin as a lowly trader with little reputation, one small ship, and a local trading office in your hometown. From there you trade with other cities, amass gold, and gain prestige with every class of citizen in town. Along the way you have to dodge or fight marauding pirates who want nothing more than sink their teeth on your juicy trade vessel and its goods.

There are several traders in the area that want what you wantâ€”more money and prestige, and they play for keeps. It’s not uncommon to sail into port with a boatload of beer, only to find out that one of your competitors has beat you to the punch by flooding the local market with beer, making your shipment’s value much less than expected. The game is all about details, and it models a staggering array of complex interactions in a mostly intuitive fashion. At times it feels more like role-playing than strategy, and it’s a highly entertaining experienceâ€¦ once you get the hang of it.

The game’s difficulty and deliberate early pace are it’s biggest shortcomings, and it’s a shame that the documentation explains little beyond the basic mechanics. A game so littered with detail demands equally detailed instructions. Thankfully, there is a good enough tutorial that will get you properly started.

Patrician 2 defines the term “niche product,” but it fills that niche nicely. If you have any interest in political or trading games (or if you were disappointed with the lackluster Merchant Prince sequel), then this is a game that you can try.