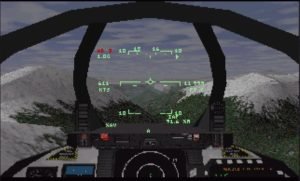 Jetfighter 3 is the F-22 offering from Mission Studios. Technically, there are many things to like about this sim. You have more texture-mapped terrain here than in any other competing simulation. Real-world plotting of cities, roads, airports is solid and accurate. Control over resolution mode, horizontal screen size and graphics options in-flight mean you can fine-tune the visuals to perform optimally on your system.

The flight model in Jetfighter 3 feels a bit arcade but does lend a sense of scale and speed. The sensation of approaching the ground and feeling like you’re going 200+ knots is there. While the missions are scripted, there’s enough dynamic processing going on that each mission will turn out differently each time through, so flying the scripted missions (or the campaign) isn’t the usual arcade-game exercise it can turn into with such designs. During a mission, you’ll hear communications both from your wingman and from other units, indicating combat status. Gearing up before a mission.

The area where I’ve encountered most trouble are the controls. If you have a gameport joystick, you can set it up to handle the commands necessary to make it function relatively realistically. Joystick setup and calibration â€“ something which should be rock-steady reliable in any sim â€“ is not only virtually identical to the one found in Jetfighter 2, but it’s also unreliable. Throttle control proved way too sensitive even with changes in dead zone and recalibration. Ultimately, then, you’re best off flying this game the way you did Jetfighter 2 â€“ with a simple joystick setup and keyboard control of throttle and rudder.

The more you play this simulation, the more it will remind you of Jetfighter 2. It’s more or less a remake of that game with some new designs, missions, flight modelling and 3D-rendered gloss.