The smash hit PlayStation game Gran Turismo changed the face of racing games forever, and in a good way. Every product released in its wake has to measure up to its standard. New racing games need to have more than just straight racing. They also need to have terrific graphics, interesting and plausible driving physics, and lots of tracks with a bunch of near-photographic environments. And most of all, they need to have a lot of drivable cars. Building a racing game around a single car, a la the superb but poor-selling Viper Racing, is seemingly a recipe for failure.

You might think doing the same thing around a single car company would be equally problematic (anyone for a fine Hyundai race game?), but few marques can sustain a game as well as the wunderkinds at Porsche. If you need proof, look no further than Electronic Arts’ superlative Need for Speed: Porsche Unleashed. It delivers everything you could want from a racing game, and does it in the most stunning package.

The cars from Zuffenhausen hold a special place in the heart of the enthusiast. And almost all of their models are represented in Porsche Unleashed, ranging from their first sports car, the “bathtub with wheels” 356 to the fire-breathing (but remarkably well-behaved) 2000 911 Turbo. The game models a grand total of 80 different cars, a few of which are available at the start of the game for standard races and others you’ll need to purchase (and unlock) as part of the “Evolution” mode of play. The game does a significantly better job than Gran Turismo at making the cars feel distinctive. In that game, a front-wheel drive car handles pretty much the same as a real-wheel drive one (which is fairly loopy). Porsche Unleashed’s physics model gives most of the models a slightly more distinctive feel.

But you may not think that right out of the gate. All of the rear-engine Porsches, up to and including the 914 in the ’70s, have remarkably similar handling characteristics. None of the cars really has enough horsepower to get you in too much trouble; while the suspension and tire technology limits their grip, they simply do not have the horsepower later cars do. The ’73 911 Carrera RS could bite you if you’re not careful. All of the 356 models and the early 911s are twitchy and fidgety when pressed in a turn, but otherwise they’re still manageable.

All of that changes both in the game and in the real world, with the devilishly fast, borderline dangerous, first-generation circa mid-’70s 911 Turbo. This is truly an untamed beast. In real-life it’s perhaps the most frightening road Porsche ever created and the game nails it perfectly. It’s nearly impossible to elegantly navigate most turns with this car. It oversteers horribly (the back end always wants to be out in front). Oddly enough, the game illustrates one interesting point that many drivers actually agree with; the best handling Porsches were probably the front-engined, rear-wheel drive 944 and 928 models. With their 50/50 weight distribution (due in large part to the engines in the front and transmissions in the back), they have perfect balance and can be driven fast a lot easier than their trickier rear-engine siblings. (The Boxster actually is closer to the 944 because it’s technically a mid-engined car, since the engine is in front of the rear axle.)

No Need for Speed game has ever purported to be a “real” racing simulation, and neither does Porsche Unleashed. Its collision detection and damage modeling falls short of the leader in that area, SCi’s Carmageddon series, and its physics aren’t the near-perfect marriage of simulation and arcade like Viper Racing. To illustrate this, it’s often more viable to slam into a wall and slide along than to brake violently and risk losing complete control of the car. The damage modeling is pretty weak. It’s well represented visually, but severe damage doesn’t really affect performance too much. Also, it’s not really localized; you can hit the right side of your car and have a dent appear in your bumper (or your windows will suddenly shatter for no apparent reason). Driving around Monte Carlo by night.

The game does a superb job at generating plausible vehicle physics, however. What the game does extraordinarily well is give you the feeling of the weight transfer that goes on in a rear-engine car with about 65 percent of its weight sitting on the back wheels. If you turn while under braking, the angle of your approach combined with the unloading and momentum of the heaviest part of the car will often lead to oversteer (where the rear breaks free before the front). If you don’t spin, you’ll usually end up with and almost instantaneous understeer (where the front wheels lose grip and you plow straight ahead).

There’s also a fabulous sense of slip sliding all over the tracks in the early model cars. You tend to fling them through turns in full four-wheel drift mode, which would normally be a “really bad thing” (in particular it would overheat the tires for the next turn), but here can be done with minimal problems. While it’s not necessarily the fastest way through turns, it’s considerably more entertaining than using the old brakes.

Not only are the cars’ physics modeled extremely well, but they’re literally beautiful models as well. Every detail of the cars, both inside and out, is well reproduced. You feel the width of the early 911s, particularly the Turbo (much of which is gone in the new 2000 models), and the feeling that the ’50s-era Speedster is possibly the tiniest sports car in existence. The details are superb, showing a flight simulation-like, near-fetish like obsession, with visually representing each detail of the models. Each car has its own unique 3D cockpit, which includes a little polygonal driver that looks left and right and also moves his or her hand to shift. If you play the “Factory Driver” part of the game, though, you’ll note that passengers do not show up in the interior views.When you own a car, you can also customize its looks by either buying additional parts or by painting the car and adorning it with all manner of stripes and colors.

The sound is also modeled well, with lots of different cockpit sounds (shifting, squeaks, and rattles), ambient noise and plenty of glorious engine sounds. Listen to the air-cooled cars make that peculiar rattling sound and the Turbos whine. It’s a virtual mechanical symphony to the car lovers among us (though it must be said, the engine sounds of a Porsche are nowhere near as awe-inspiring as those produced by any Ferrari.)

You drive your German hot rods on a lot of European-themed tracks. They all fall into the usual generic categories: mountainous, urban, coastal and snowy areas. While there are fairly generous 14 tracks in total, many are variations, with different areas marked off (Monte Carlo, for example, has five basic layouts). Races alternate with the layouts and the direction of travel, which is normally a questionable practice but absolutely works with this game. Running most tracks backwards produces an entirely different experience, especially when you factor in shortcuts that are often easier to access when going in different directions. Most of the tracks are locked when you start, requiring you complete the singleplayer portions to experience them (they are, of course, all available by default in multiplayer). 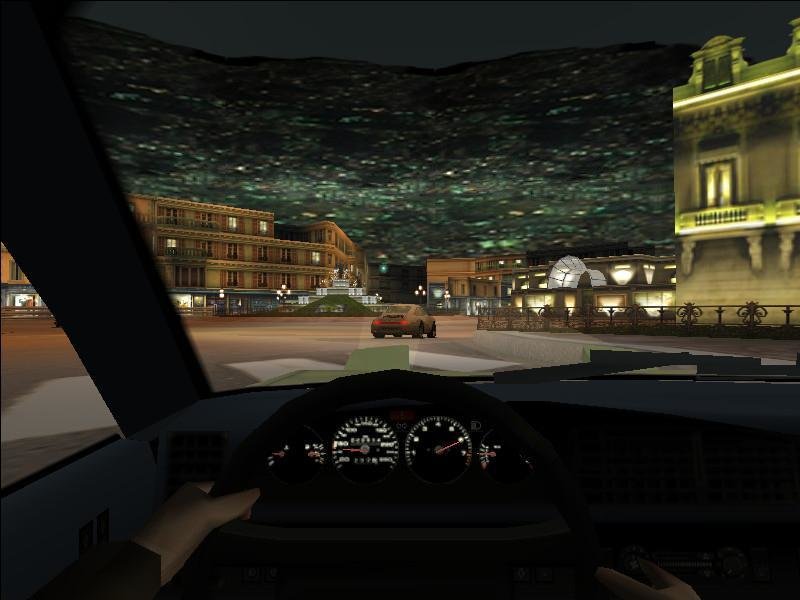 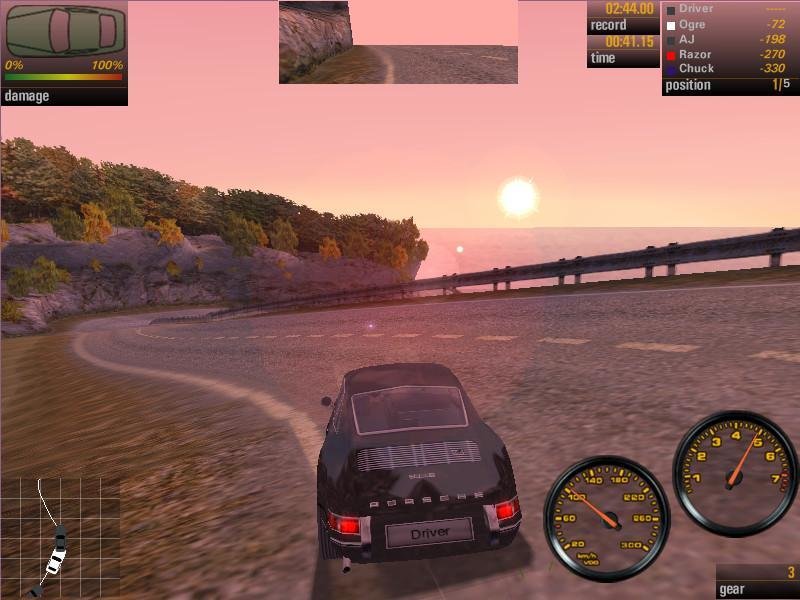