Not quite Krap, not quite great. 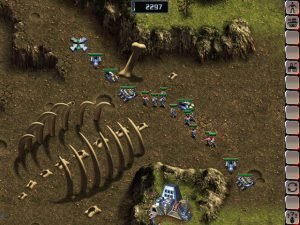 If you didn’t Krush, Kill, ‘n’ Destroy enough in the first game then here’s the sequel. Krossfire is your standard issue RTS experience, buried underneath an avalanche of similar games from that time period. Krossfire, set on post-apocalyptic Earth, starts its story forty years after its predecessor. In addition to the Survivors and Evolved in the original, a new side has been added: Series 9 agricultural robots. Nothing ticks off a farming robot more than the destruction of crops, and it’s pay back time. Unfortunately, the addition of a new side has very little effect on gameplay.

The game uses two dimensional maps and sprites for units. While this lacks the flair of a 3D game, it’s well-executed, with terrain graphics and explosions that are top of the line as far as isometric RTS gaming. A fair amount of variation exists in the terrain; city, jungle, and desert maps are all well done. Also, the terrain is actually effective; for example, infantry units can move through trees, but vehicles get stuck. Controlling high ground is a huge advantage: units can shoot down over a cliff, but the poor saps below cannot return fire. The unit graphics are excellent, with lots of variations between the sides. Unfortunately, the differences end there. All three armies are effectively identical, functionally speaking-there is an exact counterpart for every unit. This severely limits the replay value; once you know one side, you know them all. Another problem is the lack of creativity. All sides have the equivalent of the big tank, the bigger tank and the truly devastating really big tank. Bombers and transports are also included in this package, but the strategy of the game boils down to whoever has the most powerful guns. This makes the strategy rather flat.

The enemy artificial intelligence is decent. The computer usually has a huge numerical superiority, resulting in a fairly grinding experience of build-up-huge-army followed by the assault-enemy-base-with-huge-army phase of your battle plan. Every scenario is effectively the same. Overall, Krossfire is a marginal contribution to the genre. Decent artificial intelligence, nice graphics, and a so-so interface do bring some novelty to the table, but there is not enough here to make the game shine.