If you’re interested in multiplayer then Dark Reign is definitely worth a look.

The year of reckoning for RTS has and always will be 1997, with so many simultaneous releases coming out in a post Command & Conquer world that you’d think it was a TV special of “Invasion of the Clones”. That congestion also meant there would be plenty of competition and hence actual innovation driving the avalanche, to which we arrive at Auran’s longstanding classic – Dark Reign.

Right Under The Boot One of the cool new things you’ll find are the set of fully narrated ‘boot camp’ style tutorials. The player has the option of playing several introductory missions in which almost every aspect of the game is covered. (This is especially nice for those who consider the manual a last resort.) Once the tutorials are finished, though, the single player game gets steadily more and more repetitive. The plot line is weak, to put it mildly. The premise is a war between the evil Imperium and the small but resilient Freedom Guard. Before each campaign mission is a short briefing saying how the battle fits in with the general storyline.

The AI, unfortunately, isn’t as innovative as one would have liked. Apparently the computer’s favorite strategy is to try to irk the player into submission by annoying him with tons of unprepared random assaults. But fear not, fellow humans; the computer’s evil plan can be foiled by a few strategically placed gun turrets. After that it’s wave after wave of dead enemy troops as a huge strike force is built to finish the mission.

The lack of an engaging singleplayer and questionable AI are forgivable considering this game is mainly geared towards multiplayer, and despite the lacking in some areas Dark Reign still contributes on several key fronts. For instance there’s a nice waypoint feature, which includes the option for looping the waypoints around to create a patrol path. With limited fields of vision being further constricted by different terrain, patrols around one’s base can be useful. Another option is the scout order; simply tell a unit to scout and it will explore the map, avoiding any enemies it encounters. Also, there are two derivatives of the scout command: “harass” and “search and destroy.” Harass orders a unit to irritate and generally annoy your opponent by numerous limited attacks while “search and destroy” makes a unit go find an enemy and try to kill it. An alpha shot of the game, when it still looked like a so-so Red Alert clone.

Elevated terrain makes an appearance and different types of terrain – mud, water, rocks, etc – affect the way units bypass them very differently. Sadly, the perspective is so close to being top-down that it’s hard to make out where the hills are, giving the game a somewhat two-dimensional feel. At times the only way to tell there is a hill is because it’s blocking the line of sight of your units, which is actually done quite well. Perhaps the most impressive aspect of the terrain is the use of trees for cover.

Quite And Not Quite C&C

Dark Reign has all the standard fare in weaponry – tanks, infantry, mobile fighting vehicles. But also included are some novelties. There are scouts that morph into trees, and the devastating Sky Fortress that destroys tall buildings in a single blast. What makes Dark Reign nice is that almost all of the units are actually useful. Infantry are not squashed by dozens of oncoming tanks. The artillery has such long range that you can actually have it shelling the enemy base from within your own territory. Another nice aspect is that the Imperium and Freedom Guard have significant differences in their kinds of units. Although the basic forces are roughly equivalent, each side has a few special weapons that the other lacks, and they’re well. One final thing I’m thankful for is that neither side can engage in ‘tank rushes’ on a whim – gone are the days when a factory just spews out medium tanks.

Yes, Dark Reign is a good product, with a long list of features putting above many of its competitors. If you’re looking for new graphics or a good plot line, it may not be for you. But if you’re interests lie in the multiplayer arena, it’s a definite classic. 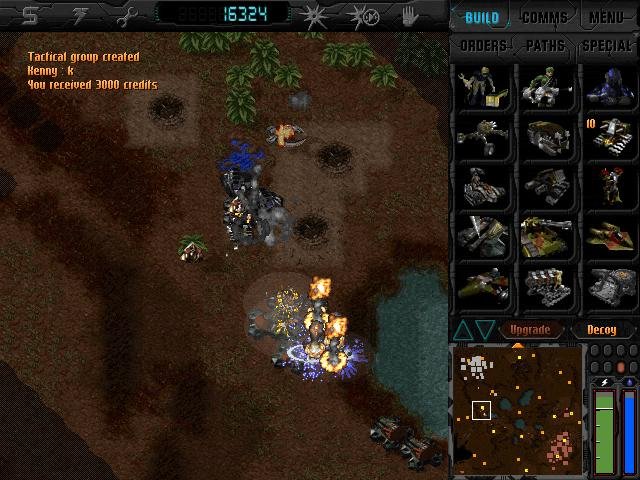