Humvee Assault allows you to drive a number of armored off=road vehicles using a simple FPS-inspired control system, where you drive, shoot rockets, shoot your MG and advance through each level. The physics system is equally simple in concept, forgoing fancy slides and maneuvering to provide only the basics. When you spot an enemy vehicle or emplacement, you can track it by hovering the cursor nearby, which brings up an arcade-style health bar over your foe. While up, this indicator also ensures that your bazooka is “locked on” and will hit your target.

Some mission elements require you to hop out and take on the enemy on foot, with a submachine gun replacing the Humvee’s cannon and grenades taking the place of its rockets. Poking around bunkers and inside palaces is more difficult, especially with the slow pace and limited range of grenades, but you won’t have to face the big guns indoors. In either mode of transit, the on-screen HUD is simple, featuring a map, a list of objectives, a radar detailing enemy positions, an ammunition gauge and a hit point counter. Strewn around every map are power-ups, like Humvee rockets and health packs, presumably dropped by friendly helicopters.

Humvee Assault is pure action of the most simplistic form, and doesn’t pretend to be anything else. The available options are surprisingly comprehensive for a budget release, however, with countless detail adjustments at the player’s command. 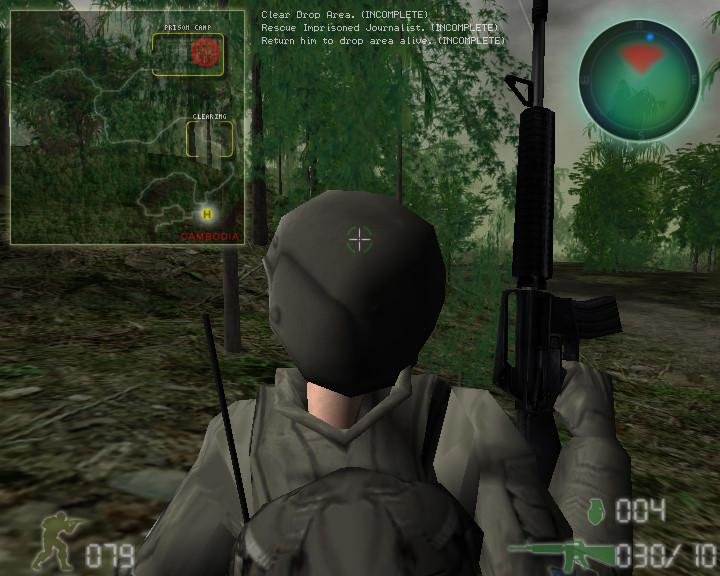