Gothic is a game you’ll love one minute and want to chuck into a landfill the next. But the game is only frustrating until you learn the controls and combat. Here is a partial walkthrough to get you started. We’ll explore the starting areas and solve a few major quests as we delve into Gothic I – The First 3 Days. 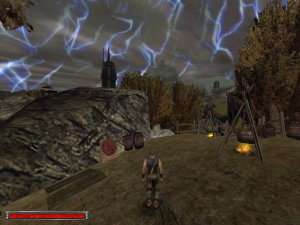 You’ll start near the loading area. Your first quest is to deliver a letter to the Magicians of Fire, but this is actually secondary to joining a faction and following the main questline. Diego will explain the basics of prison life. It’s up to you to find him in the Old Camp, which was built around the castle in the center of the Colony. Finding it is easy – just follow the mountain path to the south and you will eventually spot the large castle tower (if you’re drawing distance is set to maximum, at least). You can follow Diego directly to the camp as well, if you want.

Oh, and before going down the mountain, keep a look out for a rickety bridge. If you climb up, you’ll find a molerat. On the opposite side you will find a few ledges that will lead you up to a hidden area where there is a healing potion – quite a commodity for such an early stage. To climb up a ledge, stand in front of it, hold the jump key and press up.

Going down the mountain will eventually meet you up with Drax. He’s a friendly hunter who will chat with you for a beer (you probably found one from searching a chest near the starting area). He’ll also teach you a few skills that you can learn once you reach Level 2 and can spare the ore – but this early in the game, you shouldn’t bother asking for his skinning techniques.

Once you reach the main gates of the Old Camp, don’t give any ore to the gate guards (you probably don’t have it anyway). The Old Camp protects its inhabitants from the outside world and offers a place to rest at night, but it’s still an unfriendly place. Two of the patrolling guardsmen will immediately ask for protection money once they see you. If you refuse, they won’t attack, but will hire other thugs to rough you up. The old camp is a confusing place, so refer to this map in the future to find your bearing. You’ll probably enter through the north-western gate:

For your first playthrough, we’ll be joining the Old Camp. Go talk to Diego and he’ll send you to Thorus, who will be found near the main castle gates just two steps away. Thorus will send you back to Diego, and, if you press him hard enough, will give you a quest to get Mordrag out of the Old Camp (more on that later).

For now, find Graham, who is a cartographer. He lives near the Castle Gates. During the day he is either outside of his hut or standing inside, making him hard to spot. He will sell you a map of the colony for just 50 ore, and you should have enough junk worth that amount. If you took Diego’s Test of Faith, he’ll also give you a free map to the New Mine if you press him hard enough. You can also buy an identical map from Dexter, at the marketplace. In any case, here’s a map of the colony, with major highlights for reference: 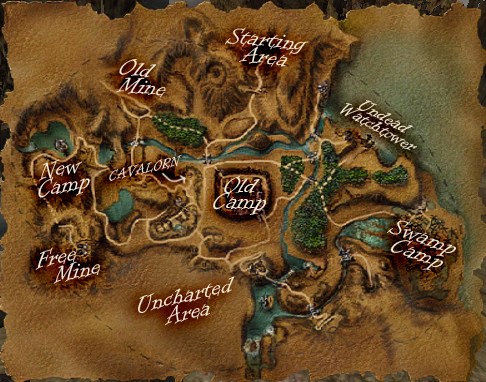 There are three quick quests you can do here. Sly will be looking for a lost guard called Nek – ask Snaf and Fletcher about him for more info. Also Snaf, the cook, will want some ingredients for his new soup, which he will give to you daily once you complete his quest – a useful healing aid. You can find mushrooms near some of the caves near the Old Camp, and meatbugs can be found near a destroyed house by the collapsed tower (south-eastern gate). Also, Nek is located in a cave just outside the south-eastern gate (collapsed tower). Take his amulet and hurry back to Sly. Lastly, Whistler will want you to buy a sword from a merchant in the marketplace. 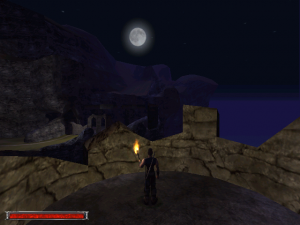 By midnight you should head for the blacksmith – it’s time to make some quick cash. Assuming you’ve talked to Huno and he explained to you how to forge a sword (optional), go to the chest located in the smith’s workshop and pick the lock (save before attempting), and you will find twenty steel rods and a few old swords. Work the foundry until you’ve turned all of the steel rods into swords, which you can sell for a tidy profit tomorrow. When done, go find the collapsed tower – inside there is a bed and a chest with some junk. This bed is the best place to rest in the Old Camp.

You probably achieved a level or two, and you could do a lot with your Learning Points. For instance, you could visit Cavalorn just outside the Old Camp, a short distance on the Eastern path. He can teach you how to use a bow and can sell you one too, which will let you attack some of the more dangerous creatures like wolves or bloodflies. 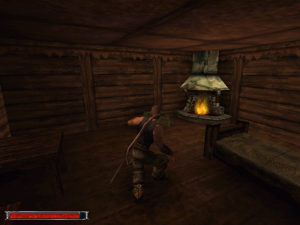 Cavalorn can also teach you how to sneak, and if you have a few lockpicks with you, you can use this skill to sneak through the Old Camp huts and rob everyone blind then fence the cheap but consistent junk for ore. Don’t forget the locked storage house near the arena! You can also earn money by learning hunting skills from Drax or Aidan (lives down east of Cavalorn). But don’t go crazy. If you learn every hunting skill, you’ll literally have more ore than you need. I did so once, and had more than 15.000 ore which I never needed.

Fingers, who lives near Snaf in the Old Camp, can teach you lockpicking (useful) or pickpocketing (useless; avoid learning). You need to talk to Diego before he will help you. Even so, you can lockpick chests without having the lockpicking skill (just save before picking any chest and learn the combination). Diego can increase your STR and DEX which will allow you to use better weapons. One-handed melee combat can be learned from Scatty, which is possibly one of the most useful skills around – you’ll use one-handed weapons a lot.

Talk to Dexter in the marketplace, if you haven’t already. He’ll send you into the Swamp Camp for a list, which gives us a great excuse to go out and explore. After decidining on your upgrades, and perhaps buying some better armor from Fisk at the marketplace, go out, kill some wildlife and earn a level or two. Limit yourself to Scavangers, Molerats, Goblins and Bloodflies. Avoid Wolves before reaching level 5-6 and having a good weapon.

The list is located in a chest in an elevated hut on the eastern side of the Swamp Camp. You can simply lockpick the chest and take it – nobody will mind. When night falls, go back to the old camp to sleep. If it’s already night, find a place to crash in the Swamp Camp. 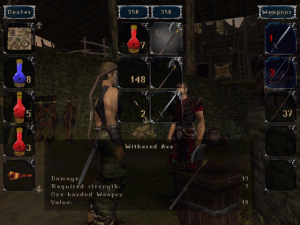 It’s day 3 and you could probably venture a trip into the Old Mine to get that list Diego wants, so head there. The list is a crossroad of sorts – if you follow Diego’s instructions and deliver the foreman’s list to him in its original form, he will welcome you into the Old Camp. But the New Camp also wants that list, so if you want to join up with their faction, head on to their camp and follow their instructions. If you still want to join up with the Old Camp, then go to Diego and complete the Test of Faith.

If you’ve beaten up Mordrag in the Old Camp (Thorus’ quest) then you will likely get told off by Fisk in the marketplace. If you want some extra experience, find him a new fence (Sharky in the New Camp is the man you need to talk to).

You only need the good will of five Shadows from the Old Camp to get admitted. Once you have that, Thorus will let you into the inner courtyard of the castle. Go ahead and talk to Milten, the Magician of Fire standing outside of the temple. Give him a letter and he will eventually hand you a reward. Then it’s time to face the guy in charge of this joint – Gomez – and ask him to let you into the ranks of the Old Camp. Gomez is a big, scary bastard who is hard to impress. Let him know that you’ve been around the colony, and he’ll hire you as a messenger, which will get you admitted. Finally, you’re a part of the Old Camp and can claim some fancy Shadow armor.

This concludes the first chapter of Gothic.