Daggerfall is big and intimidating! It’s also the best role-playing game of 1996. Here are some hints and tips to make it easier for you to play for the first days of the game. It should help you ease into the game and thrive once you attempt the main quest line. 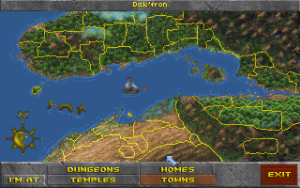 Who should I be? 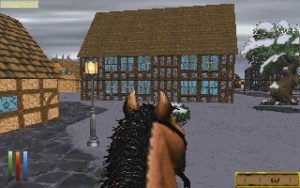 We shall play the game as a High Elf from Summerset. They have a natural immunity to paralysis, and make great fighter/magic users. Now, select “Custom” from the list of classes. Select the following Minor skills: Short Blade, Restoration, Mysticism, Blunt Weapon, Archery and Lockpicking. Select Destruction, Long Blade and Alteration as your Primary skills and select Axe, Thaumaturgy and Illusion as your Major skills.

“Alteration,” “Illusion,” “Knowledge,” “Rabbit,” “Socializing with aristocrats,” “Kynareth,” “The glorious Dragons” and “Getting along with others” are good answers to some of the twelve questions. Answer “Ebony dagger” and “A favorite book” to get an incredible weapon and something valuable to sell.

Level raises are based on your three Primary, best two Major and single best Minor skills. After you’ve gotten your first level raise, you have to raise these six skills by a total of fifteen points to get another raise. This often entails increasing each of the six skills by one and any combination of them by nine more.

You don’t have to be in combat to increase most magic skill points. Casting Slowfalling (and resting) repeatedly will increase your Alteration skill. Casting Chameleon will do the same for Illusion (once you’ve cast a spell, press the letter Q to repeat the cast). However, Shock does have to be cast during battles to increase Destructive skill. 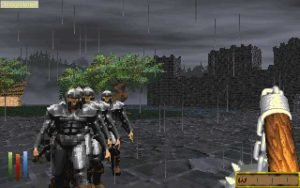 In the starter dungeon there is a room with a horseshoe table and an Archer behind it. Change your grab icon to steal and enter. Repeatedly click on the Archer to pick his/her pockets. If you pick his/her pocket at least ten times successfully, you’ll get a letter asking you to join the Thieves’ Guild after you get to Daggerfall city. After you’ve finished the starter dungeon, press the W key to bring up the world map. Daggerfall province flashes red. Click on it, then click on the Find button. Type “Daggerfall,” and go to Daggerfall city.

My Kingdom for a Horse

Stop the first citizen you see, and ask for the location of all the shops, taverns and guilds. Keep asking until s/he indicates the location on your map.

Turn south to get to the King’s Pawnshop. If you get there before it opens (at nine), click on the Rest icon and select Loiter. Never rest in town except at an Inn or in the Fighter’s Guild. You can Loiter as long as you like, however. Do not stay out in the streets of Daggerfall City at night. The ghosties will get you. In general you should not walk around cities at night at all. Enter the Pawnshop and sell your excess goods to the proprietor. Search for a General Goods store and buy a horse and cart.

Now it’s time to raid some tombs and increase our funds. Press the W key again. Select Daggerfall province and press the Find button. Type “Copperston Crypts.” If it’s dark, loiter until the sun rises. Ride your horse straight ahead (press the T key and select Horse), and enter the cemetery and then the crypt. It’s only a four room dungeon (click on the open coffin within the circle of candles to open a secret door to the fourth room), with only a couple of monsters to kill. 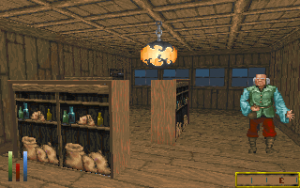 Exiting restores the Crypt with new monsters to kill and treasure to find. Load your wagon with a couple of hundred pounds of loot (it holds a thousand) and return to Daggerfall to sell it (deposit your gold in a bank and exchange it for a letter of credit). Also remember to increase your magical abilities. Join the Mages’ Guild when you can. Buy a ready-made Fireball spell from a Mage in the lobby. Visit Elausa Wickstem (the Spell Maker) and make the following Caster Only spells.

Meet Brisienna, Lady Magnessen, at the location outside of Daggerfall City she mentions in her letter. Do not accept any other quests from royalty until you are at least level four.

To raise levels, go back to Copperston Crypt and kill more monsters; practice casting your magic spells, particularly Water Walking, Water Breathing, Chameleon and Damage Health. If you want to glom onto some quick gold, steal weapons from the Odd Blades shop in Daggerfall. Rent a room in the Tavern next door. After midnight, cast an Open spell on the shop’s door and loot the joint. Sell everything to the same shopkeeper in the morning.

Meeting Brisienna begins the Main Quest quests. When you’ve reached level four, visit Morgiah (after she’s sent you a letter). Morgiah, Princess of Wayrest (select Wayrest province; use the Find button, type “Wayrest” and go to the Palace) wants you to deliver a letter to the King of Worms in Scourg Barrow (select Dragontail Mountains province, the Find button then type Scourg Barrow). 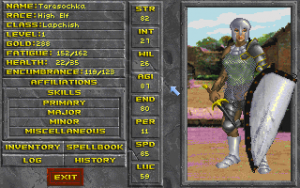 Cast Recall (the Anchor part of the Teleport spell) upon entering the dungeon. There are seven coffins inside. The second coffin on the left opens over a pit. Cast Levitate, and float down. Cast True Invisible before entering the room full of zombies. You’ll then be able to walk through the room safely. Exit through the first door on your left. Go through the door at the end of the hall, rest, and turn left. Follow the right wall of the cave hall. It will branch to the right. Enter the first door to the left and go to the back of the room to talk to the King of Worms.

The King will give you a letter to take back to Morgiah in Wayrest. Teleport back to the dungeon entrance. Go to Wayrest and talk to Morgiah. Morgiah names Mynisera as a source for further information after you’ve won her trust.

Go to The Mages’ Guild for the easiest, quickest and most rewarding quests. Select only the guard duty type. The best of these begin immediately in the Mages’ Guild upon acceptance, and are over in three hours (game time). Magic items are usually offered as rewards, and the loot from the attacking Thieves is excellent. It is possible to complete several of these quests a day and thus progress rapidly in rank, level and wealth.

Another easy quest is the one offered to join the Thieves’ guild (use the Open spell to get into the locked residence). Join the Fighters’ Guild, The Temple of Kynareth and the Knights of Dragons for even more quests, but be very careful. Save to a separate file before undertaking them, and save separately during them. Quests involving large, randomly constructed dungeons can be very difficult, especially those that have to be completed within minimal time limits; your reputation suffers if you fail.

Cyndassa wants you to kill a werewolf. The werewolf is in a randomly constructed dungeon. Save to a separate file after fighting the beast. There is a chance of being infected by the werewolf’s bite and turning into a werewolf yourself. After you’ve safely killed the beast (with the Ebony Dagger or a Dwarven Sword) return to Cyndassa. 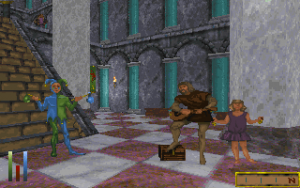 If you’ve completed Cyndassa’s quest, Mynisera (in a room on the right side of the stairway to the throne in Daggerfall Palace) sends you to Ysolda Greenfield in Deerbury who sends you to the Palace in Oxway to find Perynak Wicking (who was the Emperor’s courier). After you’ve talked to him return to Mynisera and talk to her. Since you’ve already seen Morgiah, don’t go back. Check your log entry for the exact number of days you have to wait for Wicking. Ysolda may talk a different number but the log book is accurate. Pay no attention to Wicking introducing himself as Ysolda. It’s a bug that remains even after installing some of the later game patches.

You can use some of your down time to check into a nearby Tavern and practice your spells. Don’t try for a higher level than six or you’ll be attacked at random by Zombie messengers sent by the Lord of Worms. Each time you talk to Mynisera you’ll be attacked by the Palace guards in Daggerfall (you promised you wouldn’t wander into off-limit areas). If you are fast enough you can talk to Mynisera and get out of the Palace without killing anybody

Aubk-i may not send you a message, but if you go to Daggerfall Palace and talk to her (at the top of the stairs) she may ask you to check on Nulfaga in Shedungent in the Wrothgarian Mountains. If she doesn’t, undertake a few more Mages Guild guard quests to build up your reputation.

After entering Shedungent walk straight ahead to the locked door, click on the tapestry to the left and type “shut up” when prompted. Cast True Invisibility, enter and walk past the guards up the stairs to talk to Nulfaga (then quickly exit Shedungent).

Return to Aubk-i to complete the quest. Eventually you’ll get another letter from her, but finish Lhotun’s and the Lord of Worm’s quests first. If you don’t want to use the above secret shortcut (Nulfaga reveals it in a subsequent visit) you can find the back entrance by turning right at the magically locked door. It’s a long and winding road, though.