Feel like indulging in a little retro goodness with Fallout 2? Tough luck, cuz if you’re a complete beginner, you’ll quickly realize this game hates you. But don’t be put off by the start. Fallout 2’s opening is notoriously bad. Everyone who stops midway through the first dungeon ends up hating the game. Everyone who gets past it loves it. For the friendliest hand-holding, let me recommend the PDF version of the official strategy guide. For a rough tumble through the wastes, please read on.

You may be the Chosen One, but your knowledge of the lands outside Arroyo is, roughly, squat. So is your understanding of its people and their extremely questionable morals. In terms of real-world experience, you rank somewhere between lifelong nun and professional programmer. And in the post-nuclear wasteland which surrounds your home, your naivetÃ© will make you a target for everyoneâ€¦ and everything. You’d better be prepared before you venture outside.

Strong foundations make strong houses, and the same principle is true for RPG characters. As with most good role-playing titles, Fallout 2 allows you a dizzying array of choices to personalize your alter ego, from the blatantly important (strength) to the possibly useful (stealth) to the outright silly Kama Sutra mastery). However, much as this system is devised to let you customize for your own favorite style of play, there are certain combinations which will help you get off to a good start.

Do not pick the pre-set character. Each of them is extremely skewed towards one set of attributes. When modifying your basic attributes, remember that a jack-of-all-trades can usually skate by a situation several ways, while a “theme” character (bruiser, ninja, charismatic babe) will only have one option, which may not always be viable. Try not to drop any skill below 5. One note â€” with a Strength of at least 6 and an Agility of 8, you can become a martial artist, which allows you the extra income of selling any weapons you might acquire during your travels (since, hey, fists are free).

Traits are all a double-edged sword, but some are more advantageous than others. For example, although it might look good on the surface to take Fast Metabolism and raise your healing rate, two things make this an unnecessary trait. First, Rad Away is expensive stuff, and without any natural radiation defenses, you won’t even survive the Toxic Caves. Second, it takes a bloody long time to heal even at the increased rate, so Stimpacks are still a better idea for combat, and you’ll heal up when walking between cities no matter whether you have this trait or not. In general, Small Frame, Finesse, Kamikaze, Sex Appeal, Good Natured and Gifted are the best of the traits. Those to be avoided include Fast Shot, Jinxed, Heavy Handed, and either of the Chem traits. Or, of course, you can simply choose to remain both unblessed and uncursed, and activate none of them.

Finally, of course, there are skills. Since these can be raised over the course of the game, they’re not as important in the initial character creation (which is why the Gifted trait is a good idea). You can, however, get a good start on success by allocating your tag skills where they’ll do the most initial good â€” bartering, unarmed or melee combat (depending on whether you’d prefer to use your spear or your natural weapons), and one other skill of your personal choice. Lockpick is a good bet. Let’s face it – when you’re saving the world, sometimes it’s cosmically okay to raid a few footlockers.

Save early, save often. In the beginning of the game particularly, you’ll be taking your virtual life in your hands with every single encounter. The best way to make it through a series of fights, especially if no healing will be available for some time, is not to take much damage. And the best way to avoid damage is to save before each combat, then restore if you’ve been utterly spanked by the enemy. Once you defeat him, her, or it with a minimum of damage to your own treasured hide, you can save the game and be ready to take on the next attacker.

Aim! Although you generally have a better chance of connecting with a standard blow, you’ll be better off to use a targeted shot. In particular, leg and eye attacks give you the chance to end combat in a big hurry. If a human or creature is crippled, it will almost always run away. If a creature is blinded, it will start running and stop when it hits a corner or long wall. Either way, you’ll be able to pursue and pick the damaged enemies off at your leisure, as they don’t tend to fight back.

Use Action points to your advantage. Many enemies may not have as many action points as your lucky self. Therefore, a nice combat trick for the neophyte warrior is to whack an opponent, then run several hexes away. When the enemy pursues, it may not have enough Action points left to attack. So then you whack him again, and run away again. Repeat as necessary until he falls down.

Talk to everyone. You never know who might be the keeper of arcane wisdom or local dirt. Although both “good” and “nasty” conversational paths are usually provided, the game is easier to win if you stick with the “good” options. Once you’ve finished a major quest in any given town, try chatting with the named townsfolk again.

Seek what is hidden. Not only are many useful items stashed in pots, desks, barrels, bookcases, and other storage containers, but plenty of goodies are obscured by the 3/4 perspective walls and shadows of Fallout 2’s terrain. Always walk along the unseen side of a corridor or room, in order to reveal every possible hex of a map. As an added clandestine bonus, the evil designers of this game used the coloration of terrain to hide various objects in plain sight. For instance, a nice set of metal armor lurks in the Redding mine, practically invisible unless you run your cursor across it.

Just say No to drugs. With the notable exception of curative items such as Stimpacks, Antidote, RadX and Rad Away, most chemicals are a bad idea. Their temporary effects are just not worth the possibility of addiction. (Due to some quirk of game designer humor, this also includes the ubiquitous Nuka-Cola and everyone’s favorite card game, Tragic. Hey, first one’s free!)

If it ain’t broke, save the points. You will receive additional skill points each time you advance a level. If you can’t figure out where they might be immediately needed, don’t just allocate them to something which happens to be low – forget about them until you get into a tight spot later and want to raise a certain skill. They never expire.

Choose your perks carefully. There are lots of perks available to the advancing character. Although all of them can be of some use, only a handful qualify as “must haves”. Foremost among these are the perks which can raise your attributes. (There’s nothing like a free extra point in Strength to turn an average fighter into a true contender.) Other splendid choices are Living Anatomy, Pack Rat, Explorer, Smooth Talker, Slayer, Swift Learner, and Tag!

How to Not Screw Up Early 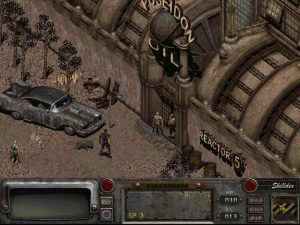 Sometimes in Fallout 2 you don’t realize you’ve made a mistake until it’s too late. You will have the opportunity to make many decisions, as to your destinations, companions, and activities. Although some of these actions seem like a good idea at the outset, they may later become a minor (or major) headache. For example, don’t pay Sulik’s debts. When you rescue Smiley, you’ll have the opportunity to spring your bone-nosed future comrade for free. Of course, if you’ve already ponied up the cash in a burst of goodwill towards your fellow tribal man, you won’t have the opportunity to reclaim it.

Use your comrades as pack animals. For some reason, they never get pickpocketed or searched. But be careful what you give to your Deathclaw buddy – at some point, he’ll abruptly leave your party, and everything you’ve stashed on his carapace will go with him. He’s a bad choice, for instance, to carry your healing supplies or money. Give him nonessential trading items which you don’t mind missing.

If you are a complete beginner, set the combat on the lowest setting for the least amount of frustration. The quests will offer plenty of challenge. Setting combat difficulty to “Wimpy” instead of “Normal” will make the enemies receive a penalty to perception (the chance to hit). Also they do around half damage when attacking. If you change it to “Tough”, the enemies will receive a bonus to perception and take more targeted shots. Their combat damage will be increased by nearly 50 %.