You’ve flown in Microsoft’s Flight Simulator for years, or maybe you’re a real pilot who has entered the combat simulation arena for the first time. Perhaps you’re a virtual jet jockey, and you’re accustomed to beyond visual range engagements with modern weapons systems. Leave most of what you know behindâ€”now you’re engaging in up close and personal air combat. In this article we’ll look at the four stages of air to air engagement and consider some of the tactics necessary to fly and fight in Microsoft’s Combat Flight Simulator. 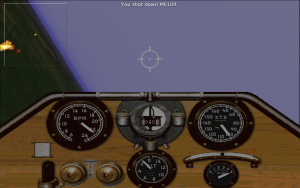 There was no radar on WWII fighters, and seeing the enemy first was the key to many air-to-air victories in WWII. Bud Anderson and Chuck Yeager survived the war and fought successfully in large measure due to their excellent eyesight. As a virtual pilot your first task is to locate the enemy. Microsoft has built some tools into CFS to compensate for the limitations of the CRT display. The most important of these tools is the Tactical Display (TD).

Used in conjunction with padlock views and the no cockpit view, this display is your greatest ally in a fight. Toggle the TD on and off with the F9 key. The display shows you the allegiance and position of any aircraft within range. You can also use the display to make a guess as to heading relative to your own flight path.

The tactical display gives you a 360 degree view around your aircraft, which is represented by the yellow cross at the center. The display is oriented so that up is always at the front of your aircraft. From the center to the edge of the display is 5000 meters.

AI pilots in Combat Flight Simulator come in five levels of skill and use the same flight model that you will use. AI pilots are fully aware of the individual strengths of their aircraft, and the higher their level of skill, the better they will take advantage of those strengths and seek to exploit the weaknesses of yours! You will see pilots using energy, altitude, and maneuverability to their advantage.

Enemies appear on the display as red dots. A yellow dot represents your currently selected target. Turning on Labels (N key) will also assist you in identifying enemies and establishing their distance from your aircraft. Once you have found the enemy, you move into the next phase of engagement.

At this stage you must assess your current situation and mission goals. Where are you in relation to the bandit? Have you been spotted? Do you have time to maneuver for advantage? What is the strength of your force compared to the enemy? What about the relative strengths of your aircraft? How is your fuel, ammo, energy level? It’s at this stage that you must decide to either commit to engage the enemy or to run for home. 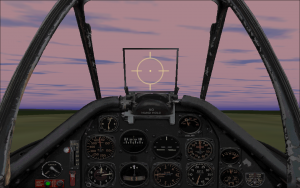 If you have the advantage, by virtue of position, energy, strength, or numbers, your decision should be to engage. If you are at a disadvantage, you should withdraw and wait for another opportunity. Likewise if your mission goals are restrictive (for example when you are flying escort) then you must assess your chances for success relative to your primary goal. Before closing on the enemy, make note of the bearing of important landmarks.

In particular, note where friendly territory is located in relation to where your fight will take place and the direction of your mission objectives.

You’ve chosen to engage. Now you have to consider when to take your shot. Most sim pilots shoot too early, and at impossible angles. One of the key differences between missile engagements and Combat Flight Simulator engagements is that in the latter your aircraft is actually the aiming platform for your guns. Consequently, your ability as a pilot is a key factor in your marksmanship. The position of your aircraft relative to your target is critical. The greater your angle off the tail (referred to as AOT), the more difficult your shot. If you are able to maneuver so that the deflection angle is very small, the chances of a hit are much greater.

The other physical component of your attack is your weapon system. Some aircraft have guns, some have cannon, and some have both. The calibre of these weapons is a factor in their range, and both calibre and fire rate are a factor in their lethality. Cannon have a greater calibre and greater range, but fire fewer rounds per minute and have a lower muzzle velocity. As a result a hit is more difficult to get, but when the round makes contact, lethality is much greater.

When your aircraft is equipped with both guns and cannon, it’s a good idea to employ them separately. In general use your guns for lining up your target, and then employ cannon when you see a hit, or a moment before. (Tracers are a helpful clue as to when to employ cannon because you can usually tell when your next shot will make a hit.) 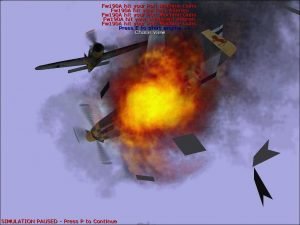 There are two basic orientations of engagement: head to head (H2H), and head to tail. Each requires its own set of tactics. For fighters, it is preferable to attack from some angle off the tail, since this means that the enemy’s weapons are not trained on you. When you are forced into a head-on attack (H2H) never fly in a straight line. Instead weave in and out across the merge patch so that your gun-sight crosses over your opponent at each weave, and when it does so squeeze off a burst. If you begin your engagement turn a second or two prior to merge, you can increase the chance of getting on his six.

Depending on your air speed, combat flaps can give you an advantage in your turn rate. The head to tail attack is much safer, but also has risks. Perhaps the most common error made by beginners is the overshoot. An overshoot occurs when your speed is too great and after firing a few rounds at the enemy you suddenly find yourself in front of your target, the last place you want to be!

The solution is energy management. If you see that you are about to overshoot your target, you can trade speed for altitude. If you have closed your throttle but are still closing too fast, pull back sharply on your stick so that your aircraft rises up over your target instead of passing to the front. Level off before you reach stall speed, and roll over so that you can locate your target across the top of your canopy. Then pull down toward your target to begin another attack. You can even shoot while inverted!

You’re out of ammo, or you’ve taken damage, or you’re low on fuel, or the fight has become two on one, or your mission goals are at stake, or you are outclassed. It’s time to exit the fight. What do you do?

The best position to disengage is one that puts you furthest away from your enemy with the most speed. After a merge, for example, when your enemy is heading 180 degrees away from you, is a great time to dive away for speed and keep on going. If your aircraft has an advantage in a climb, this is also a good option. You can also use terrain or clouds to your advantage, or fly toward a friendly who can act as a distraction or maybe help. Finally, if you have to, you can always bail out!