Diablo is the best dungeon crawl Iâ€™ve ever played, and despite itâ€™s age, the game is remarkably easy to get into. But youâ€™re about to play it for the first time, you might get killed within the first couple of dungeons and rage-quit early. But with some useful hints and guidelines, that will hopefully not happen. 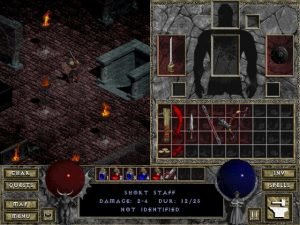 The Warrior is the strongest of the three. If youâ€™re just starting out, your first playthrough should be as the warrior. He is easiest to keep alive because of his large number of hit points and his ability to deliver massive damage and wear the heaviest armor as the game progresses. You will rarely use magic as a warrior, but should beef up your magical attributes when you find your first Healing and Town Portal books early in the game. These two spells will always find some use, and it’s a shame to leave your mana pool unused throughout the game.

On the upside, every spellbook or magical staff your warrior finds can be sold, earning him a tidy extra income. He can also repair his items as his unique ability, though he will lower the overall durability of any item he performs this action on. You should never use it.

The Rogue is possibly the hardest character to master. She will use the bow as her primary weapon, but this is difficult since enemies will often move around fast enough to avoid her volley of arrows. When they get into melee range, her ranged weapon, though still able to damage enemies, isn’t half as useful. There are some unique bows scattered around the levels, but not nearly as many as melee weapons, so her upgrade opportunities are fewer. And while her magical skills are more potent than that of the warrior, she could never pass for a skilled mage. She can detect and disarm traps, though the usefulness of this ability is debatable since traps are little more than minor annoyances. Only play her when you want a real challenge.

The Mage is definitely the hardest character to play for the first stretch of the game, but becomes the most powerful towards the end. You need to be extremely resourceful when starting out as a mage, being careful to pick up and sell any extra item you find. You need to fuel not only your life, but also your mana pool, and Adria – that no good witch – won’t recharge your mana for free like Pepin does for health. She also takes gold for recharging staves, which you will use a lot as a mage. The incredible range of spells you will learn, however, make this character by far the most interesting. He can recharge staves himself when short on gold, but like the warrior’s repair item ability, this lowers the overall charge count, and should be used rarely or not at all.

Most of the quests are straightforward, but a few merit special notice. To find water for the poisoned well quest, look for an interior room with no entrance. You will find a crack with some lamps around it. Move your cursor over it until you get the entrance message. 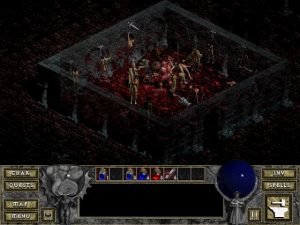 Shrines are purposefully cryptic. You can sometimes notice what they did if you look closely at your stats or inventory, but other times they are so obscure that you can walk away clueless of whether activating it had a beneficial or detrimental effect on your character. So then here is a complete list of Shrines and their effects. 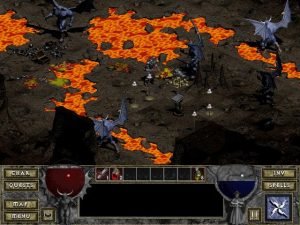 Multiplayer Diablo is very different from singleplayer mode. You can start as a new character and jump straight into a game even if you donâ€™t have an internet connection. Since multiplayer games respawn each time you re-enter, you can level up fairly quickly without exposing yourself to much danger. If youâ€™re looking for online play, try hosting a game on Gameranger and you might get lucky and find another player. Levels (Church, Catacombs, Caves, Hell) become unlocked according to your character level.

Thereâ€™s no party system in Diablo 1, however, and if a much stronger player is really inclined to ruin your day, he can just attack and kill you and steal your gear. Most players, fortunately, have the common courtesy of challenging you to a duel before fighting. Some, like myself, help out scrubs with gold or quality items.

The good news is that the original Diablo 1 is easy to trick. You can simply make a copy of your character profile located in your game folder. Everything you had will be â€™frozenâ€™ to that character profile, which you can store for later use. This can also be used if you want to help out a party member with some of your unique items or gold. Simply copy your character profile, give him your stuff, exit the game, replace your new character file with the old one, and you will have everything back.