In the near future, global economic collapse will bring about groups of crime cartels battling for supremacy against the Free World Alliance. You figured you had it made, intercepting items for your own use, living the good life — or at least as good a life as possible in the economic ruins of a bygone age. But that was before the F.W.A. got its hands on you and stashed you in prison for the duration (in other words, until they needed your special skills). Then they give you your goal – break into Cyberia, a secret military base.

Thatâ€™s the background, and Cyberia puts you in control of Zak, equipped only with an arm-mounted gun and a pair of high-tech sunglasses. Through some rather acrimonious meetings with Devlin of the F.W.A. and a slippery character named Santos, you learn youâ€™re to fly on a predetermined course to the Cyberia Complex. Unfortunately, itâ€™s not simply a matter of climbing aboard your TF-22 and zooming off. Some last-minute problems on The Rig, Santosâ€™ mysterious mid-Atlantic operations base, leave you facing plenty of trouble before you even reach the ship. There are a couple of mildly challenging puzzles to get through, and some firefights that depend as much on timing as they do on aim.

Most of the game involves flying through a series of missions as you inch your way across Europe and toward Cyberia. I use the term “flying” loosely, since youâ€™re really just along for the ride as far as piloting goes. As in Rebel Assault, your craft actually flies itself while you aim the guns with a crosshair cursor. This might seem like a welcome feature, since it leaves you free to concentrate on your marksmanship, but it gets old really quickly. You find yourself wishing you could take control of the plane to get a better angle on a target. In fact, I could only take it in small doses since frustration and boredom start to affect my aim after a while. Youâ€™ll be much happier and considerably saner if you approach Cyberia as a fancy rail shooter. On that level, the game works, with plenty of action minced with simple adventuring – an odd cocktail, no doubt. The adventuring part is hit and miss, with one linear trail through the game world and zero room for error. Take a bad turn at the wrong moment, and you’re dead. The game is merciful enough to auto-save around every corner, and so you never really have to replay long chunks of the game.

But in the end, Cyberia will probably fail to impress both hardcore adventure and twitch gamers. There’s just not enough consistency in either – the rail-shooting bits are dry and the adventuring is a simplified exercise of trial and error. 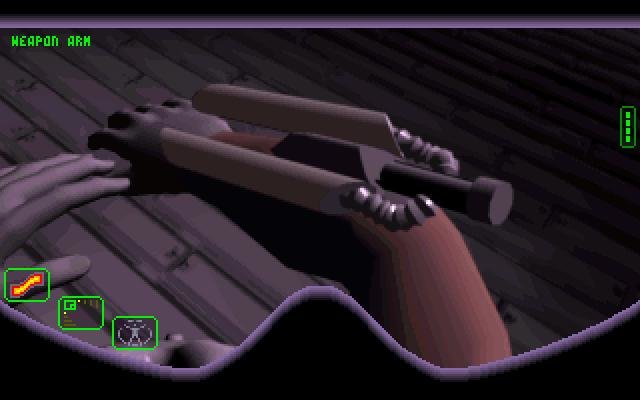