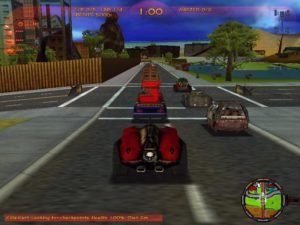 Back when Carmageddon came out, the concept of a driving game that rewarded insane driving – including wrecking other cars and running over pedestrians – seemed fresh and exciting. The sequel improved the graphics and physics, but also added gimmicky stunt events that annoyed more than entertained – the main course was still the pointless mayhem. Carmagaddon TDR 2000, the third game in the series, does the unthinkable by toning down the violence – instead of mowing down screaming peds you mow down zombies, who all look rotten and expel green goo when splattered.

Much like in Carmageddon 2, you still race around a track and must feed the timer by causing general destruction. Cash can be used at the end of the race to buy opponents’ cars that you have destroyed or to upgrade your own car engine, armor, or offensive ability. Power ups are scattered around the track – mines, mortars, zombie flamethrowers, zombie electrocuters, high-grip tires – whatever your little heart desires. In the creative power up game, the Carmageddon team is a clear winner. The game has a limited number of maps, but they’re huge and allow a lot of variety.

The gameplay is mostly the same, though replacing the human population with zombies really does take a huge bite out of the fun. Not only are peds less tempting to kill because the game rewards you with lower time bonuses, but they’re also a good deal harder to kill as well. Even on the lowest difficulty, you have to learn where the time bonus pick-ups are found or otherwise concentrate on smashing the competition before they race away from you.

The physics engine likewise feels much the same. Cars skid, roll, and flip dramatically. You can fall off a 10 story building, land on your nose, roll onto your roof, get creamed by a speeding car and flipped back onto your wheels, and drive after him to ram his ass. Cars fly around like an over-the-top Hollywood stunt show, and that’s clearly what people have come to expect from the Carmageddon series. 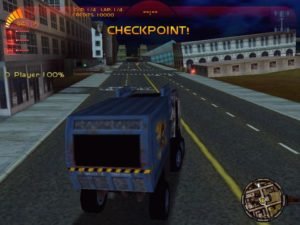 As in Carmageddon 2, some of the races are not against other cars, but the clock as you try and get to some place or destroy something. These missions are very annoying, and you’ll probably need to replay them multiple times. They sometimes have these little floating arrows to direct you where to go, but they’re not as helpful as they could be. To be blunt, it’s the same set of annoyances that brought down Carmageddon 2. This and the aforementioned zombie makeover make TDR 2000 the least fun Carmageddon out of the entire series.