Every now and then a game comes along that sets a certain standard. A benchmark against which all subsequent games in the category are judged. Origin’s Ultima Underworld II has been at the top of the RPG pile back in 1993, and the phrase “It’s good, but not quite Underworld II.” has entered steady usage after the game hit record sales. Using the same first-person 3D view pioneered by the original Ultima Underworld, Ultima Underworld II: Labyrinth of Worlds is better in every way. It’s bigger and more complex, with far greater variety of gamepla. The plot is more involved, and the graphics improved as well. What’s the same, though, is the claustrophobic atmosphere, which, combined with the 3D engine, succeeds in creating a world as unnerving as the hellish tunnels of Doom II.

Character creation is fairly straightforward. The player can choose among eight classes (Mage, Fighter, Ranger, Bard, Druid, Shepherd, Paladin, Tinker) and can customize the class by choice of skill. These classes influence in how you approach the game, but overall they are not superbly balanced. While all of the classes have the potential to complete the game, some of their skillsets are less useful to have – the Mage, for example, can open locks and repair items with his spells better than the Tinker. Other skills, like Swimming, seem completely pointless.

While the improvements from the previous game are definitely there, Ultima Underworld II features gameplay that is fairly similar to its predecessor. For newcomers there’s a well-written tutorial to ease you in, but mastering the controls and combat takes simple practice. Role-playing is still important here – there are many characters to interact with, both in the dungeons and the castle, and the story is fairly interesting. In short, the game isn’t all about killing monsters and grabbing their loot. Play the game long enough and you’ll experience some of the its more subtle elements – like sleeping on an empty stomach will earn you a restless night, and that you won’t rest as soundly on a bedroll than a fancy bed. But don’t just eat and drink anything you find, since certain mushrooms in the world can give you some trippy visions. The quests you receive from non-player characters can also be solved through non-violent means, and not every quest is a fetch job.

Doom may be faster and have more visceral action, but doesn’t quite have that feeling of space that you get from exploring Underworld II. You can, after all, swim, jump, fly and look both down and up – abilities that were never though of in either Doom games. Overall this is a great RPG for its time. 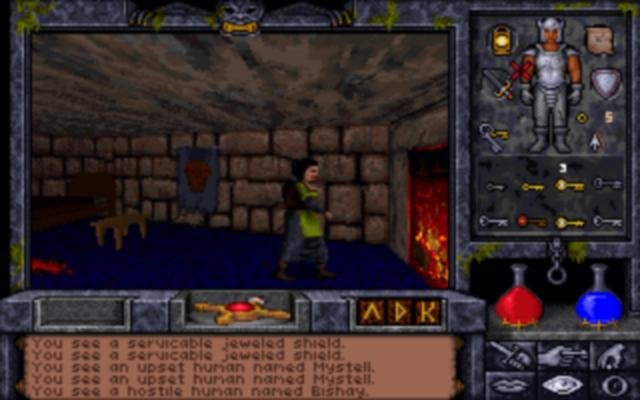 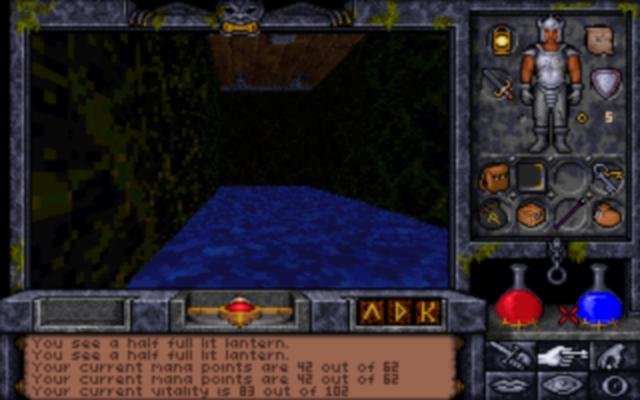