Welcome to the Roman Empire-cradle of Western civilization, conqueror of half the known world, nightmare of every high school Latin student, and a darned fine place to make a quick denarius. Here, you must build a series of ever-more impressive cities, all for the glory of Caesar and the advancement of your own career.

Succeed, and you will find yourself showered in riches and bathed in the glow of Imperial favor. Fail, and your head will be set on a pike outside the city walls as a warning to your successor. Talk about management incentives. The only way to keep both your fortunes and your precious hide intact is to turn the barren wilderness of Europe into civilized real estateâ€¦.

The Romans were the original city planners. From the development of aqueducts and plumbing to the invention of the suburb (“suburbium”-housing located near a city), they had their architectural act together. You would be well advised to follow their lead whenever you start a new city. 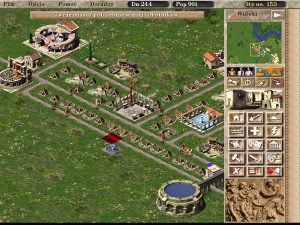 Of course, you have one option the ancient Romans never dreamt of: when a new assignment starts, crank the Speed setting all the way down to 10%. This will give you time to survey your new domain and plan your initial settlement. Take a good look at natural landscape features. Remember that you cannot run an aqueduct over rocks, and that an impassable line of trees will prevent settlers from getting through. Examine the terrain for defensibility and available resources. In particular, locate every possible source of food production and keep those in mind while you make your plans.

Now, before you clear a single tree or place the first stone block for your new roads, check the Empire map. Find the cities which are willing to trade goods with you, and make a list of all the items they are ready to purchase. Most of your city’s income will be in the form of trade, so it’s important to plan your economy around fleecing your neighbors. (Hey, it’s the Roman way.) Return to your city view and check the Industry list for this particular assignment. Look at your Raw Materials, Farming, and Workshop options. Match these up with the items your neighbors are willing to buy.

Two things are vital to a brand-new city: food production and trade. Without enough food, workers will scoff at the notion of moving to your city. And without a stable income, you’ll soon end up in debt to Rome. This would be an unfortunate situation-while Caesar is very fond of his money, he has no particular attachment to his underlings. Many a promising gubernatorial career has been cut short by the business end of a lion. Therefore, your first small settlement is crucial to your future success.

The ideal site would be one with access to both farming and an exportable resource, protected on at least one side by a ridge or river, close to either a water or land trade route, and capable of being piped by a reservoir. Unfortunately, the ideal location rarely exists, so water and farming should be your most important requirements. Clear an area adjacent to fertile soil. No matter how much farmland might be available on any given map, it should never be squandered. Romans eat like ravenous warthogs after a three-month famine, and the larger your city becomes, the more food your citizens will demand. So place as few non-farm structures on fertile land as possible. 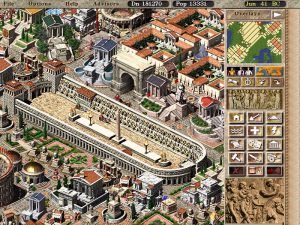 Lay an open square of roads enclosing a four-by-four block of land. This modular “subdivision” arrangement seems to work quite well, and allows housing to develop into multi-square developments. Place a reservoir or reservoir/aqueduct system nearby to provide pipe access for the entire central area of the subdivision. Then place fountains on opposing sides of the block, right next to the road. Fill the central 16-square area with housing, and attach it to the main trade road. Place a bathhouse, market, praefecture, and engineering post along two sides of the subdivision.

Now you can speed time up and watch the arrival of your new minionsâ€¦ sorry, “citizens.” Once they’ve set up a collection of tents in your initial settlement, build a road into the fertile land and place a farm or two. Just outside of the “farm zone” (remember that you can build a farm anywhere next to a fertile square, so leave a three-square border around the yellow tufts for future farm expansion), place a granary. 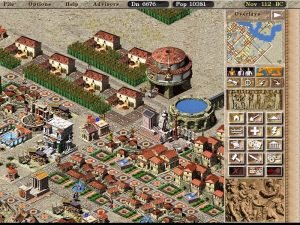 Once the initial settlement is stable-albeit not very advanced due to the lack of educational and religious facilities-it’s time to start looking at trade. Reduce the game speed to 10% and re-examine your export options. Your first trade good should be one which takes the fewest amount of support buildings since your workforce is still quite small. Raw materials such as marble and iron require nothing more than a mine and a warehouse for export. Pottery and weapons, on the other hand, also require a workshop. Land caravans are better for an early trade route than sea-going ships, as the former do not require a dock.

Once you’ve chosen the simplest possible trade good and opened the best possible route, build a second settlement in the same manner as your first. If at all possible, share one side of the block with your previous subdivision, so that one market and bathhouse can serve both areas. Connect the new settlement to the main road, build your industry, and place a warehouse as close as possible to the caravan road or dock. Then crank up the speed again and let a new flood of immigrants make your city profitable. Once the first industry is working, you can build additional sources of trade. Remember, a single resource mine or farm can support two or three associated workshops.

Enemies at the Gates

At this point, less than a year should have passed. In many regions, though, this is more than enough time for enemies to notice your expansion and come marching your way. There’s nothing like a legion or three to ensure domestic tranquility. 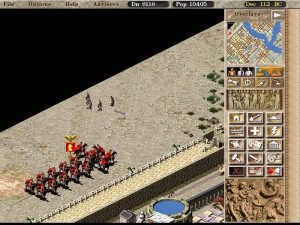 Before you build a barracks or a fort, however, you should give some thought to city walls. A walled city is a strong city, and the stone barriers also give your troops time to mobilize and reach an invading army before it can enter the heart of your settlement. Build walls and gatehouses to protect the bulk of your developed terrain, leaving enough room around the edges for future expansion. If you have the spare cash, build your defenses two walls’ worth thick, and place towers to discourage invaders.

Once your passive defenses are in place, build a barracks and a military academy. Then place a fort away from your subdivisions, so that it will not lower property values. Although the barracks and academy need a nearby population to staff them, a fort needs no workers and can be placed far from the usual employee sources. Your first fort should house javelin troops, since standard legions require weapons, and weapons require a large amount of industry which is difficult to muster at first. Once you have additional funds and manpower, you can build weapons workshops and legion forts, since these will allow you to field far more effective warriors.

Although the game manual recommends placing your forts outside of the city walls, there is a very great advantage in ignoring this advice. When an enemy is confronted by a wall, they have to break through. This usually results in them removing a small square of wall, then filing through in small numbers. If your legion is stationed on the inside of the wall, they can simply pick off your enemies one by one as they enter.

Now that you’ve taken care of the basics, it’s time to expand your city! Improve your housing and encourage the immigration of new workers by adding schools, doctors, theaters, and temples. If at all possible, try to offer at least two gods and two types of entertainment to each subdivision. Turning the square of roads around each subdivision into plazas will often improve housing by quite a bit. As soon as possible, build a pottery industry-this will also contribute greatly to housing evolution.

Build additional subdivisions, and take advantage of all available food-production areas. You can never have too much grain or too many fish. Keep your eye, though, on how many trade goods each route will purchase in a year, and don’t bother producing too much. The workers used to mine more than 15 or 20 units of marble each year could better be utilized in education, entertainment, or food production.

Final Touches to your City

You’ll find a variety of wildlife in your assigned provinces. Herbivores aren’t a problem, although they can be annoying when you’re trying to place buildings, but carnivores are a serious threat. Wolves can take out an entire crowd of immigrants, following closely behind the group and picking them off one by one. To avoid this hassle, just build walls around each wolf pack to keep them isolated. 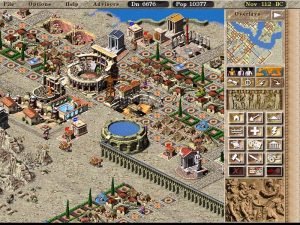 Wine is dangerous. Not only does viniculture take up valuable farmland, but the availability of wine in your city leads to that most appalling of social diseases-patricians. These losers lounge around in their villas and waste your resources, contributing nothing but money to the city’s upkeep. Since workers are almost always more valuable than mere taxes, wine is an evil to be avoided. If you enjoy throwing huge festivals (and, hey, who doesn’t?) or if Caesar has a habit of requesting wine, you can stockpile a little for future use, but don’t let it get out to your markets.

Always go into debt – once. The first handout from Rome should basically be considered as Caesar’s “new settlement” tax, and will do wonders for your initial construction, without seriously harming your reputation. However, you should do everything you can to avoid incurring a second debt. If the big guy’s in a wine-chucking mood over your finances, you’ll have major problems.

To improve housing in the far reaches of your city, set your local warehouses to Get Goods from central stores of pottery and furniture. Telling your outlying granaries to Get Goods from other parts of the city will result in a more varied diet for your people, particularly if you’re raising pigs in the east and growing vegetables in the west.

Once every 12 months, throw at least a large festival and send a nice present to Caesar. This will cut down on riots, godly ire, and Imperial annoyance, and ensure your popularity on all three fronts.

Good luck, and good fortune to you!