Heroes of Might and Magic (or Heroes for short) is an excellent classic strategy game in the same vein as King’s Bounty. A game of tactics and careful management that merges strategy and role-playing together, Heroes lets you play a variety of turn-based scenarios or attempt a full-scale campaign. 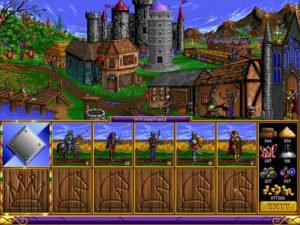 Part of the reason why it’s so fun is its ease of use and retro familiarity. Some players will notice bits of SSG’s Warlords series here and there, but anyone who has played King’s Bounty (also from New World Computing) will feel right at home. This is in many ways a supercharged version of KB, adding more depth and control to an already fine gaming formula. There’s no drilling through menu after menu to find whatever information you’re looking for, but instead you can access just about anything with but a few mouse clicks. It’s this ease of use (courtesy of Jon Van Caneghem) that made it so compelling.

You’ll need plenty of information as you compete against three other heroes, either computer-controlled or against another person (on the same computer or via IPX). Each player starts with one hero, a few troops and their home town. Their town can be improved upon by adding taverns, guilds, shipyards and various creature dwellings that slowly churn out troops that you can hire into your army. Once you’ve recruited a few creatures, you can take your army out and explore the map, capturing resource generators, treasures and – ultimately – venturing into your opposition’s territory and battle his own heroes. You’re victorious once you’ve captured your opponents towns and defeated his heroes. Ah, I spot caches of treasure!

As you win battles and find treasures your heroes will gain experience, allowing you to increase their stats. The four different hero types have their own strengths and weaknesses, and it’s very important to know what they’re facing when entering battles lest their hero be easily defeated. Combat takes place in turn-based mode on a grid. Heroes don’t participate in battles per se, but they act as supporting spellcasters. Likewise, their stats have a direct impact on your how your units perform, so even moderate armies led by high level heroes are much more powerful than larger ones led by beginners.

Heroes might not be the most original turn-based fantasy game of its kind, but it is wonderfully designed, and more than a match to other high tier games of its kind.