Hersheypark minus the overpriced souvenirs. Given its whimsical ambience, it’s obvious that 3D Ultra Pinball: ThrillRide is targeted at the casual gaming side of the spectrum. Sim junkies should pass, but for casuals it’s a potentially fun ride. Although the playing field runs one table deep, dozens of spinners, targets, ramps, flashing lights, and moving parts are included to keep you thrilled. Recognizable attractions range from roller coasters to Ferris wheels and the wet n’ wild log flume, each named in accordance with their Hersheypark counterparts, upon which this table is based on.

The Fun Zone, opened when the “RIDE” lights are lit, yields up another set of activities. Full-fledged mini-games that demand their own screen lurk in this demesne, including a virtual roller coaster ride that corkscrews and loops according to the directional indicators struck by the ball. Half a dozen flippers placed at varying distances from the plunger make combos, skill shots, and bonus award receipts of the aforementioned magnitude possible. Even mundane shots have a knack for causing the display to erupt with visual stimuli. Sparks and confetti, respectively, shoot out of bumpers and targets when struck. Traveling on a ramp may cause your shiny sphere to latch itself onto a passing car or boat in preparation for multiball mode. Visits to the Chocolate World snack shop produce small pictures of tasty treats and souvenirs (sodas, pennants, candy). Balls whizzing around the Wave Swinger circuit cause the contraption to spin in their wake, tossing passengers about with wild abandon.

As a whole, this package is enjoyable, but it does have its low points – the single table that is offered, while having a lot of bells and whistles, dies tend to get old fast. And despite the game’s title, there’s nothing really 3D about it. But as a whole it does enough flashing lights to keep your attention for a few days. 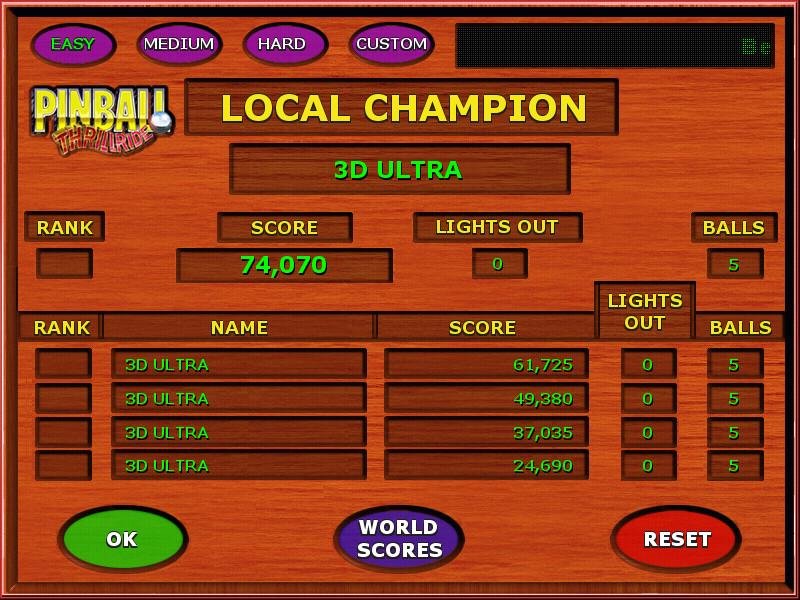