Natural Fawn Killers is a pretty basic, violent and not that exciting hunting game. Unlike other better hunting games, this one requires little skill to get into and offers less enjoyment as a result. Granted, it is more arcade than anything else, allowing you to use not only standard weapons like a hunting rifle, but also a chaingun and grenade launcher. The challenge is to kill innocent and cutesy critters (deer, rabbits) within the time limit and to bag their remains. 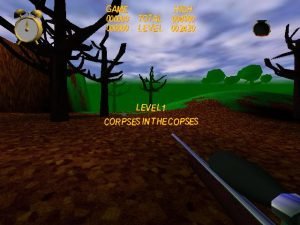 The graphics are either 3d accelerated (through Glide) or through software. It is impossible to switch between the two without editing the registry, however. The graphics are not very good to say the least. The environment is very chunky and the sky is basic. The audio fares better, with clear weapon and voice work, but few sound files overall. Your alter ego will occasionally deliver obscene quips after downing some game, and the deer let out a high pitched scream. The death animations are likewise detailed.

NFK is a game that is incredibly simple on the whole, however, and with little replay value. Rabbits and deer hardly ever run away from you before you begin shooting, so you can simply get in really close and fire away. The hardest thing is killing bears and that’s only hard until you find the grenade launcher which is able to blow them into pieces. I know that this game is meant to be a parody but I found it too outlandish to be even that.