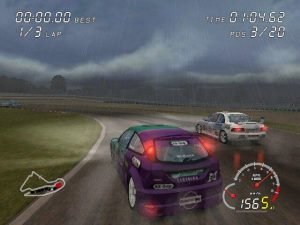 The guys at Codemasters were really good at creating fantastic racing sims, such as Colin McRae, for both PC and Xbox. TOCA Race Driver is a more career and story focused driving sim, but with all of the Codemaster emphasis on realism. As you begin the game, you can choose to participate in series of free-style events, selecting your “wheels” from a wide range of cars. In this mode you can also pick tracks you’d like to race through. Next to that, you may try out a few additional modes, such as Time Trial and Free Race, both of which can help you get in shape for the tough racing career that lies ahead.

The Career mode follows the life of race driver Ryan McKane. You have to prove yourself in a number of ordinary racing events that are brief, but quite tricky. These few events at the beginning can do wonders for your driving skills, so it’s quite an effective tutorial and you’ll certainly need it if you’re a rally newbie. In due time your improved skills may surpass even the most competitive driver, which could in turn improve your reputation with the rally club manager. The storyline goes on from there, and as you progress, a whole bunch of driving opportunities, challenges, and events will be open. Aside from the traditional-style championship races, Ryan can travel to various parts of the world competing against various race drivers.

Thanks to the story-driven championship and free-style racing events, TOCA Race Driver has straightforward gameplay. It’s a challenging game that requires you to have a mid to high end racing wheel, yet stuff like controls and vehicle handling are aspects that were well-balanced. Granted, regardless of these positive aspects, there are issues that point to the game being unfinished. The AI is pretty bad, with opponents ramming into your car if you happen find yourself in their pre-programmed route. They seem to slow down too much in turns but manage to speed up really high in straight roads.

Another aspect which may possibly come as a slight disappointment to hardcore players, is the way vehicle optimization was handled. Managing your car before each race should prove useful, but most of the time it doesn’t. For example, adjusting the downforce or suspension degree, doesn’t seem to bring any tangible results on the track. Each car has specific features which require some getting use to, but when you try to ease the situation by tuning and modifying the car parts, you just cannot feel any improvement on the track.

The multiplayer is actually quite good, supporting LAN and even split screen mode for quick matches on the same computer. But it’s just not quite enough to make the dodgy driving AI more appealing during the solo races.