An action game with great looks, some brains, and a lot of Trollocs.

Robert Jordan’s The Wheel of Time is a tapestry of epic conflict, ancient evil, and good old-fashioned swords & sorcery. Like The Lord of the Rings, Jordan’s books encompass the fate of the world, characters of giant stature, and the rise and fall of nations. In short, the setting is rich and engaging, and just perfect for an Unreal Engine-powered action game. 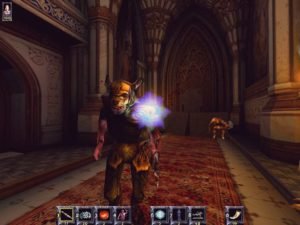 Wheel of Time does indeed do fine job of capturing the look and feel of its source material. Visuals are subjective, of course, but the way Legend’s artists have presented their interpretation of Jordan’s world seems very polished, convincing, and authentic. It’s also flat-out stunning in many places. If you’ve read the books, you should be very pleased at the way the game portrays Tar Valon, Shadar Logoth, the Blight, and other Jordanesque settings. If you don’t know a Trolloc from the Amyrlin Seat, you should at least be able to marvel at Legend’s use of textures and the realistic architecture of the game’s structures.

Make no mistake—this is a shooter. A fairly difficult, fast-paced shooter at that. It’s not quite as frenetic as Unreal Tournament or Quake III Arena, but it’s no Thief, either. There are no RPG elements in the game, no character development, and few problem-solving options other than main force. There is a story, and it’s a damn good one, but it’s told via cutscenes rather than integrated into the actual game. Where The Wheel of Time sets itself apart from other shooters is in the subtlety and nuance of its combat. Rather than having a small selection of weapons or spell, the game features dozens of artifacts, called ter’angreal, which generate effects varying from fireballs to teleportation. Fighting effectively means choosing the right artifact for the right situation, and using it at the right time. 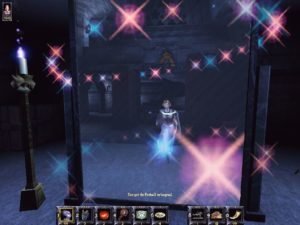 The context for all of this mayhem is a solid and compelling story that’s set before the events detailed in Jordan’s fantasy novels. But you don’t need to know any of it to play the game, which is pretty straightforward. The solo game is made up of a series of 15 missions, played out over 19 levels, with some overlapping locations. Several missions have multiple parts in the same area, and feature stuff like locked doors, obstacles, and watery tunnels. Mostly, though, it’s a matter of finding ter’angreal and using them to blast enemies. Some missions have more elaborate goals but all involve combat.

Anyone familiar with most modern 3D shooters should have little trouble getting the hang of things here. With the exception of a use key and a crouch mode, the controls are standard, and fully configurable. The combat is fun, mostly, and always spectacular. The spells range from awesome to pedestrian, and the lighting seems very good while balefire makes for quite a show as well. But be prepared to die a lot – this is a hard game, especially if you are not an ace shooter player.

If you come to this because of an interest in the subject matter but aren’t a big fan of 3D action games, you’re going to be frustrated by the difficulty. Multiple spell-casting enemies, melee and missile-weapon using foes in tandem, Myrdraal that fade away into shadows and reappear—all of these things are difficult alone, and when the game throws them at you all together they can be overwhelming. Add to that all of the fire-and-forget hunter-killer spells in the game and you have a recipe for hair-pulling that would make Nynaeve proud. 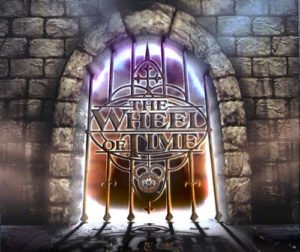 There’s a lot of fun here nonetheless. Roaming the halls of a besieged White Tower, battling Trollocs and Fades – all good stuff, and you’ll get your gold pieces’ worth of thrills. Just be sure to save often. A lot of the levels feature devilish traps, which are often impossible to avoid, but there are few actual puzzles to sidetrack you. Still, the game has enough deviations from the pure shooter formula to distress fans of straight-up fighting. As Wheel of Time is neither a pure shooter, nor a pure adventure, it straddles the middleground and offers just the right dose of excitement for the average first-person shooter fan in search of originality and challenge.