In The Ward you play David Walker, a U.S. astronaut who is having a very bad day on the moon. After an unknown force demolishes both his lander unit and the orbiter, our hero is stranded without any hope of survival. This rather fragile state of affairs decays further when heâ€™s abducted by very hostile aliens. To save the earth and get back home, David has to work his way through a tangled web of alien intrigue, while figuring out mysterious extraterrestrial technology and interacting with surly comrades. Without a doubt, The Ward is point-and-click adventuring at its most traditional. While some of the brain-stumpers can be puzzlingly abstract at first, the game slowly dishes out subtle hints to reduce frustration. Experienced adventure fans will be more inclined to play on Normal mode where they don’t get these helpful gameplay nudges.

The Wardâ€™s sci fi presentation is retro. Even though the graphics are hi-res, the washed-out character sprites look awful, and the majority of the alien environments have that shiny, spotless sheen of rendered artificiality. The cut-scenes are real groaners as well, rife with terrible voice acting and totally unconvincing animation. At first I wanted to slag the game for omitting any in-game voice acting — but to be honest, if the cut-scene voice quality is any indication, itâ€™s a blessing in disguise. Another problem stems from how the gameâ€™s crucial items blend into the backgrounds, resulting in the typical mouse-sweeping pixel hunt. While clicking on one alien console may not do anything, another identical console in a different room may be the key to your progress. If something doesnâ€™t seem to work, you might want to try it again — in one sequence, you have to remove a panel with a screwdriver, and you have to click on it a half-dozen times before it actually moves. There are other questionable design decisions, such as a few timed sequences and a crappy inventory panel.

But the biggest issue is how all of the characters have the combined personality of a cinder block, thanks to a half-baked translation job from the gameâ€™s original Croatian. With story being the most important facet of adventure gaming, this is less than ideal. With lines like “Security drone suddenly appeared in ventilation shaft” The Ward won’t exactly rank as a classic and tense point and click adventure. 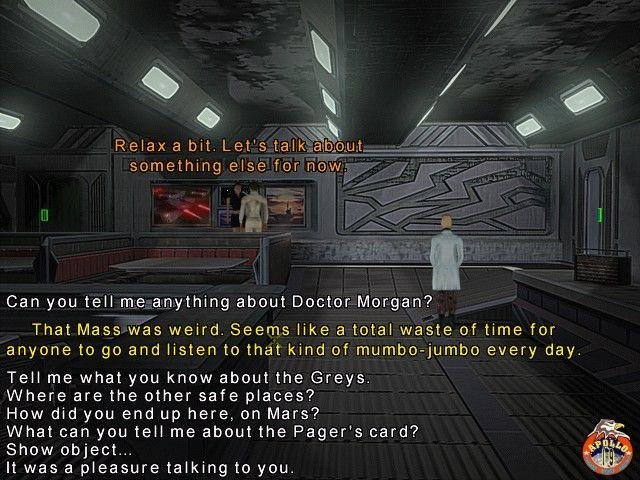