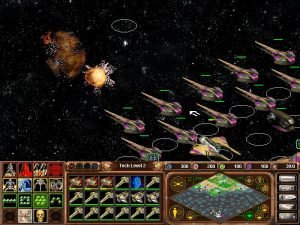 With the original Star Wars: Galactic Battlegrounds, a real-time strategy game that played like a really good mod of Age of Empires II, didn’t break any new ground. With the theatrical release of Star Wars: Episode II: Attack of the Clones, LucasArts came up with the predictable decision of taking their old game and grafting an expansion pack to it. Clone Campaigns comes with the regular bells and whistles common with an official expansion. It adds new factions, new units, and a couple new campaigns.

The two new campaigns encompassing a total of 14 missions are a mixed bag. LucasArts did a nice job with the campaigns in Galactic Battlegrounds, but here they’re dull and lifeless. The missions use almost no triggers or events, and most are simple search and destroy missions, production missions, or a blend of the latter two. You might as well skip the campaigns entirely and jump right into skirmish mode or multiplayer. 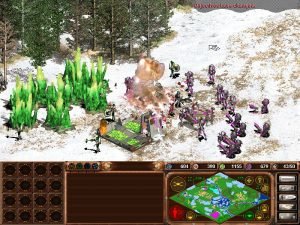 Besides adding purely new things in the expansion pack, LucasArts also tinkered with some existing things. For example, instead of just building power cores to power your buildings, you can also buy power droids to do the same thing. The problem is they aren’t very useful (power cores are fairly cheap after all), and so I’m not sure how worthwhile the addition is. Each faction also gets a new siege weapon called an Air Cruiser, a behemoth that makes the StarCraft Battlecruiser look puny. It’s actually overpowered in this sense, having huge splash damage and ability to out-range anti-air systems.

There’s definitely a lot of new stuff to be found in Clone Campaigns. Between the additional two factions and units added into the level editor, you’re looking at some 200 or so new units to play with. The campaigns are a hit and miss, but the retweaking and balancing of existing units goes a long way in making Clone Campaigns into a worthwhile multiplayer experience.