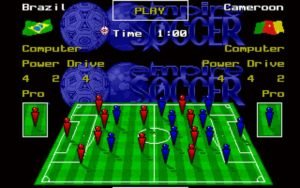 Empire Soccer 94 is the PC version of the coin-up arcade game from 1984. Although the view is top-down, the pitch is small and square, and the players appear huge on it. A range of moves including overhead kicks, trapping the ball and quick 1-2 passes can be used. Before each match your team can choose special moves to assign to each player – power shots, super dribbling (making the ball stick to your foot), and a Barge power to push players out of the way.

You can use substitution patterns and formations, but these result in little tactical differences in gameplay. For the uninitiated, the 4-4-2, 4-5-1 or 4-3-3 formations are very different. Certainly at the World Cup level, one would expect to see a difference, but it’s barely noticeable. In any case, while entertaining in a retro sense, this is very much an 80s game trapped in a 90s floppy disk.

One only needs to witness the level of team intelligence on display, which is basic to the extreme. Since you only control one player, you are forced to rely on the program to handle the business of getting players to do what it takes to follow through on a play. There seems to be no sensible running off the ball, no covering back, no decoy runs, no field vision, nothing. For this reason, team-play is virtually non-existent in both offense and defense, and it takes a lot of fun out of this soccer game.