Grand Theft Auto III will have you star as a lowly escaped thug out to settle a few scores in Liberty City, a thriving metropolis with a notoriously far-reaching criminal underworld. You enter the game with no real prospects, but then steadily get acquainted with several crime families after your pal and fellow escapee 8-Ball puts you in contact with some Italian guys who are ‘connected’. But getting down and deep in Liberty City is never straightforward, and you’ll eventually find yourself performing odd jobs for all manner of gangs and shady characters, often shifting loyalties as a direct consequence. An awesome view of Liberty City.

Even though this third installment of the series comes packing a new 3D engine and a huge urban landscape, bits and fragments from past games are still around. An optional overhead camera is a reminder of a bygone age, but what was also kept and greatly enhanced from GTA 2 is the free-roaming aspect and mission-based gameplay. There are a total of 51 storyline missions which you must accomplish to unlock every island, weapon and car, plus there’s also a consistent side offering comprised of optional arcade racing and rampage challenges, unique jumps, and hidden bits of this and that scattered throughout town.

The story missions are accompanied by engine-rendered cutscenes performed by some high profile voice actors (Joe Pantoliano, Michael Rapaport, Michael Madsen), all of which lend a cinematic feel to what’s already an excellent crime story. It’s fitting too, as Liberty City is essentially every crime movie metropolis rolled into one, complete with a plethora of sights, missions and fine details.

The city is divided into three boroughs, and you’ll gain access to all of them as you progress through the storyline. You start out in Portland, the city’s old industrial district that’s also home to Liberty’s thriving sex industry controlled by the mob. A later change of scenery will have you working for crooked cops and shady businessmen in Staunton, the Manhattan-inspired commercial district and heart of Liberty City, and then it’s finally off to Shoreside Valve, a scenic neighborhood where the rich and middle class live in relative safety.

There’s always some contrivance or another preventing you from reaching the other end of town, but at least they’re logically integrated into the story. There’s no invisible wall preventing you from reaching the rest of town at the start of the game, but a bridge ripped apart by a colossal explosion from a bomb, which, incidentally, also secured your escape from the prison convoy that was ferrying you across town. You can still try to jump the gorge separating the two ends of the bridge with a fast car, but you’ll always end up fish food as a result. The game is actually more enjoyable for withholding large chunks of the world, as you’ll find that each island-sized borough has enough stuff to keep you distracted. You’re free to perform the story or side missions, explore the city or just go berserk and raise some Hell.

It’s worth noting you’ll need to raise substantial Hell before the cops come looking for you. The rate at which you gain notoriety with law enforcement is pretty clever – a line of six stars track your wanted level, and they rise according to how serious your misconduct is. Minor felonies, such as carjacking, vehicular manslaughter or drive-by shootings, will gain you some popularity with the cops if they catch you red handed, but you can easily shake them off by fleeing away and laying low.

Keep causing trouble and your wanted level will rise accordingly. Squad cars will spawn more often and they’ll give chase, and police helicopters will periodically harass you from above. You know you’ve caused quite a ruckus when the army gets involved, replacing police officers with heavily-armed soldiers that jump out of military trucks and tanks. Thankfully, you’ll almost never need to gain that level of attention from the law, and you can shake them off completely if you can just reach that Paint-n-Spray garage or find those invaluable Police Bribe power-ups. Police cars will pursue you around town, try to box you in or even ram your car off the road. The AI is consistent in other areas as well, and can pull off a few tricks to make the world seem more alive than it really is. Run over an innocent with your car and a crowd of onlookers will gather to investigate the tragedy, then an ambulance will rush in and paramedics provide first-aid. Or set something on fire and a fire truck will spawn nearby. Best of all is that you can steal any one of these emergency vehicles and conduct special missions for cash. Steal a taxi and you can deliver commuters across town, often leaving a trail of bodies and broken lampposts behind you as the timer approaches zero (and you fail the mission). Grab an ambulance and ferry injured passengers to the hospital before they die, or use a squad car to kill criminals. Cash is awarded if you can keep at it for long enough, and also special bonuses will be delivered to your hide-out where you can save between missions. Extinguish enough fires and you’ll get a flamethrower at your doorstep; save enough lives and you’ll get a health power-up.

Unfortunately, the AI has some obvious mishaps that could potentially ruin your fun or at least make you question the logic of the world around you. The AI is so programmed so as to only take your crimes into account, leaving cops indifferent to other peoples’ misdeeds. Cops will actually flee if they’re shot by another NPC. Pedestrians are quite terrible at getting out of the way of your speeding vehicle, and will often jump straight in front of you with almost suicidal glee. I’m not sure if this AI quirk was accidental or deliberate, but a radio add for an exploitative law firm encourage people to jump in front of running vehicles for cash settlements… so who knows.

Regardless, the wayward pedestrian AI will inadvertently get you into trouble where none was due. Then you have cars that frequently change lanes for no apparent reason, usually right in front of you as you’re trying to speed through busy traffic. You can sorta counter this by stealing an emergency vehicles and letting the sirens loose. 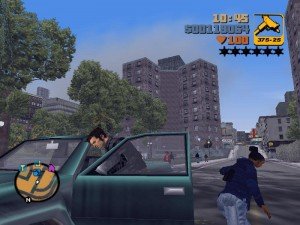 Can I borrow this truck for a sec? Thanks.

Other areas of the game, such as combat or some of the racing missions, need more polishing before they can be called fun. Your arsenal of weapons is diverse enough for any job, starting with head-craking baseball bats and continuing to rifles and a rocket launcher, but firefights in general just feel too crippled and punishing to evoke enjoyment, even with the added PC-only mouse support. Guns are slow to aim and fire, and your character isn’t durable enough for some of the more intense missions. Looking back, you’ll realize this game effectively kickstarted Grand Theft Auto and helped shape the franchise for what it is today. This is definitely an action game you’d want to try. 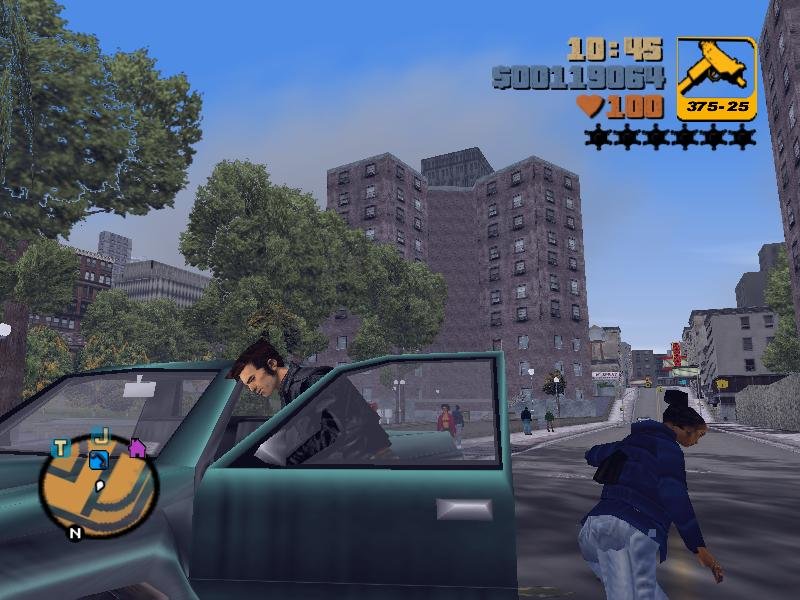