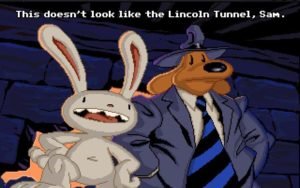 Way up many adventure gamers’ list of favorites is Sam & Max Hit the Road. The two leads are an anthropomorphic dog (a six-foot-tall canine gumshoe) and a rabbit (a three-foot-tall hyperkinetic rabbity thing). All they ask out of life is a boat of a car, mounds of junk food, and the chance to indulge in mindless violence in the name of law enforcement. They like to call themselves the ‘freelance police’, and have a talent in solving apparently unsolvable cases.

Their debut in a comic book series by Steve Purcell gained them fame, and they enjoyed cameo appearances in several of LucasArts’ previous releases, including the first two Monkey Island games and Day of the Tentacle before finally starring in their own graphic adventure in 1993. The game has since become a retro classic, as highly regarded as the Monkey Island games or Day of the Tentacle.

The winning combination in Hit the Road is humor, characters and engaging puzzle-centric gameplay. The detective duo find themselves lumbered with the case of Bigfoot and the giraffe-necked woman, two critters who’ve fled the confines of the local carnival. You must search America for clues in a clapped-out Ford DeSoto, and on your way find attractions that are truly bizarre. 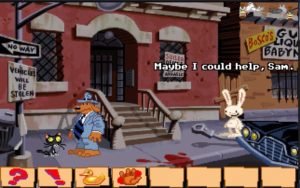 The game uses a map system to get around important locations, so this is by no means a linear game. You can travel between locations at any time, and often you’ll have to backtrack to previous areas to solve a puzzle in a new area, or check to see if you’ve missed something. The puzzles aren’t extremely hard, so you’ll hardly ever get stuck for very long. The game uses a modified version of the SCUMM system, and banished the old control panel from games past with a more intelligent multi-purpose cursor.

As with the Monkey Island series, the main jist of why Sam & Max is so charming is because of its humor. And while Guybrush was a genuinely funny wisecrack, the crime-fighting pair here plaster every line of dialogue full of sophomoric jokes.