A lot of soul went into Shiny’s RTS, but it’s not quite perfect.

Although Sacrifice is branded as a “real-time strategy” game on the box cover, it’s really a curious amalgamation of several genres welded together in a singular package. However you categorize it, it’s still a gorgeous, polished and groundbreaking product as it is, but one still offset by chaotic battles and a lack of precise micro-management that’s so sought after in this particular genre. 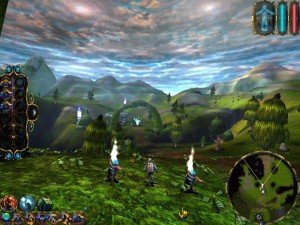 No sooner does the introductory cutscene begin that you’re likely already engrossed in what will be a magnificent fantasy epic, counting as arguably the best reason to pick up Sacrifice You play the part of a rogue wizard by the name of Eldred (Paul Eiding), whose homeworld has been turned into ashes for reasons unknown. Guided by his whimsical familiar, the flying owl-like imp Zyzix (exceptionally voiced by Rob Paulsen), Eldred travels across the Astral Void and wanders into a new plain of existence, one ruled by scheming gods in need of a powerful wizard to do their dirty work.

Each god has a different philosophical outlook on the universe and their own realms under dominion. Naturally they are at complete odds with each other, so choosing one over the other will grant you one god’s heavenly gratitude (measured in new units, spells and increased stats), but will likewise earn the ire of the other four should you go against their own interests, which is usually the case. It’s impossible to stay on everyone’s good side forever, and so eventually you’ll have to pick sides and stay loyal to one god in an ensuing conflict which stakes the fate of the world in your hands. 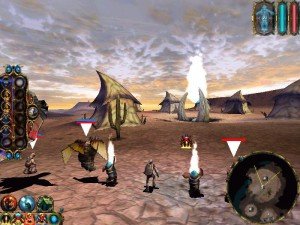 The way in which you choose your missions and align with particular gods is an extremely refreshing alternative to the structure of most RTS games. It lends the single-player game a high replay level, as the path to the game’s ending differs greatly based on your alliances. You’ll only get to experience a total of 10 missions during each playthrough of Sacrifice, but there are 46 missions in all, nine for each god, and one “final battle” mission you get in the end regardless of your path.

You won’t have to herd peasants to mine wood or gold as is so common in other strategy games. The main commodity here are souls, which you collect from slain enemy or friendly units, and which you then use to summon an army. This creates a frantic effort to repel enemy armies and harvest the souls that they leave behind – typically you can grab friendly souls right away, but capturing rival ones takes a lot more time. It initially feels weird since your role is primarily that of an observer and supporting spellcaster, unleashing devastating spells and summoning new creatures to join the fray, and not that of a hand-to-hand fighter. If fact you’re pretty vulnerable in combat, but fortunately it’s not the end of the world if you do get cornered and die – you’re simply relegated to an ethereal plane, floating around as a ghost until you regenerate enough health and mana to pop back into existence. The downside to this is that you can’t do any spellcasting or soul harvesting in this form.

Most of the missions are spent battling against one or more belligerent wizards, with the purpose of finally desecrating the opposition’s altar so they’re banished forever. It’s a two-way deal, however, as your altar can just as easily be desecrated. Altars are the most vital buildings in need of protection; the only other notable structure is the ‘Manalith’, which you raise atop randomly distributed mana fountains to keep your wizard fueled (and deny mana to enemy wizards). They double as watch towers when you assign units to guard them, and are a great way of drawing borders on the game’s huge maps. 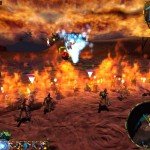 Side with mighty Pyro for fire-based spells. 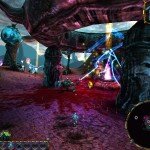 Desecrating an enemy altar (right) while a defending army (left) readies to repel an impending counter-attack. 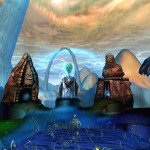 This is where the gods hang around.

For me Sacrifice is a love-hate thing, specifically love for the witty theatrics and hate for the controls and sometimes grueling difficulty. From the onset the game assumes you can control the action with the default key layout and mouse, but this is rubbish. You get three whole sub-menus you have to drill through – one that pertains to structure-related spells, one for combat spells and finally one used to summon creatures. Going through these menus is especially difficult in the heat of battle, so assigning keys to every function is a must – it will only net you a marginal advantage, however. 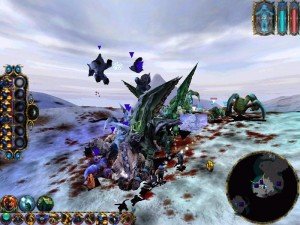 The central issue here is that it’s generally difficult to understand what’s going on in a pitched fight, who’s killing who and what tactical fine-tuning should be applied. As is frequently the case with real-time strategy games, clashing armies tend to degenerate into chaotic free-for-alls, made all the more incomprehensible here by the lowered third-person perspective. An optional overhead view could have easily countered this problem, and a simple pause button would have been a godsend (pun intended) for some of the trickier engagements. At the very least it could have had a difficulty slider for novice players.

I typically don’t condone cheating, but in this case it’s worth it. Going through the story is highly recommended, listening to the gods bicker in witty dialogue is lovely, and I always found myself eager to see what happens next. Gameplay is fine too as long as you can accept the fact that it’s more about frivolous mayhem than careful planning, but otherwise there’s a ton of fun to be had here either way.