Trading and swashbuckling all the way.

If you’ve brushed through Ascaron’s Patrician series of trading games then you largely know what to expect from Port Royale. Set during the 16th and 17th centuries in the Caribbean, the game is played during a tumultuous colonial background – skirmishes and minor wars between fledgling nations meant a lot of chaos on the open seas, but it was also a good time for merchants to make serious money. At the same time, ships loaded with goods proved an irresistible temptation to pirates and cutthroats.

You choose your nation of origin – England, Spain, France or Holland – and go about micromanaging your trade empire. As with Patrician, what this means is you’ll be sailing ships from from town to town, buying the best goods at the best prices and selling high for profit while dodging the occasional band of raiding pirates along the way. As you sail the Caribbean, you’ll discover that each port has it’s own array of supplies available, and eventually map out worthwhile trading routes.

You have a good deal of options in how you better your finances and reputation in Port Royale. You can accept trade missions from local governors, build farms and plantations to secure your own production of goods, or just rob everyone in sight and become a ruthless bloodthirsty pirate yourself. A welcomed improvement with Port Royale is that you don’t have to micromanage your entire empire – you can assign certain routine tasks to the computer to handle. 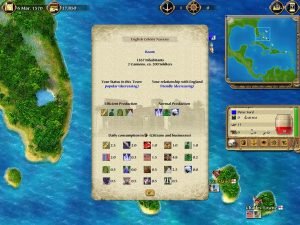 Port Royale uses a simple real-time combat system. You can sink enemy ships, or capture and use them for your own fleet. And some of the more notorious pirates can be captured and ransomed or turned in for cash, a fun but difficult venture to take (pirates tend not to be pushovers). Naturally, the more famous (or infamous) you become, the more likely others will want a piece of you. For example, if you yourself pick up pirating to make ends meet, many ports will eventually refuse entry, and you may become the target of military fleets.

With the exception of the vibrant graphics and a more intuitive interface, Port Royale is fundamentally the same game as Patrician, with all its addictive perks keeping you around till micromanagement overload sets in. Overall it’s a fun trading game to tackle for those looking for more of the same.