A good game tucked underneath the roadkill branding.

Licensing has its merits. Where would Tony Hawk’s Pro Skater 2 or Madden NFL be without the sponsorship of their namesakes? But for every well-planned marketing coup, there’s another product sinking into obscurity. Observe Off-Road Redneck Racing, a feeble attempt to cash in on the semi-popularity of Redneck Rampage. Never mind that this game is merely a European import (Rage being a UK-based developer) dubbed over with Southern sound bytes and cheesy visuals. It qualifies as redneck simply because the concept behind it was so gosh durn ignorant.

Don’t take that the wrong way, however. Despite an ineffectual presentation, you might nonetheless find some solid racing thrills in Interplay’s game. While limited options for solo championships and split-screen challenge races may seem like a shallow array of diversions, the gameplay is reasonably fun and (don’t laugh) semi-original. The beating that you’ll inevitably take when four-wheelin’ it through desert canyons, down mountain slopes, or across Everglades territory is less tolerable, however. Opponents play a mean game, using their superior horsepower and foreknowledge of track layouts to give human chumps a wicked spanking. Early on, you must learn the virtues of nudging competitors, cutting corners, and aiming for that ever-elusive perfect path, because inexperienced racers just can’t duke it out on straight shots. Virtually nonexistent are the games that provide an even challenge right from the get go. Even more frustrating is the missing reset key, so crashing your car will inadvertently leave you way behind your opponents as you strive to recover, a significant letdown for an arcade racer. And there’s no way of restarting a race in Championship mode short of loading a saved game. A restart option would have saved several seconds of pointless menu hopping yielding the exact same result. Practice makes perfect, so count on spending a few hours behind the wheel. Memorizing course conditions and mastering the controls. Once armed with this knowledge, you can sock it to those annoyingly aggressive jerks who are always charging up your tailpipe. Remember, if the computer won’t play fair, fighting dirty is your sole recourse. In bad spots you can also dish out a limited supply of unspectacular nitrous bursts to gain extra speed. Getting over the initial bumps can be tough. Advance a little though, and you’ll soon advance a lot.

As for the redneck factor, this title’s as southern as Manfred from Munchausen. Originally designed for UK audiences by Rage Software, Interplay simply adjusted the program to suit their misguided purposes. So while mud, snow, rain and day/night cycle inclusive 3D visuals look spectacular (if rather stiff), levels such as the slaughterhouse appear as a construction yard and nothing more.

As good as the product looks, there was certainly sound reason for giving the product a green card that let it onto American retailers’ shelves. Shamelessly branding the game with an uncomfortable license and making only minor cosmetic changes was probably not the best way to go about it, however. The repetitive, ear-splitting sound bites ripped right out of Redneck Rampage and constantly delivered by your driver serves as a good example, and says a lot about this redneck racing wannabe. 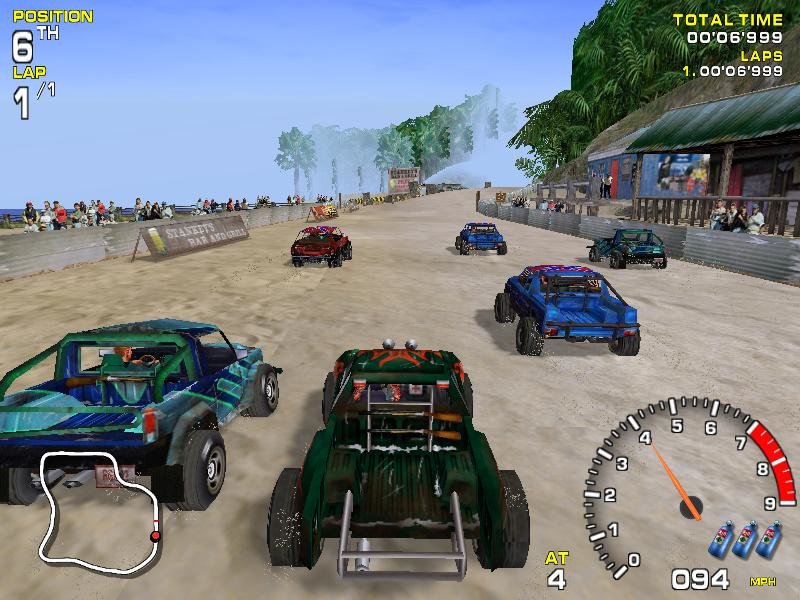