A shiny engine and wheels, but otherwise it’s the same muddy arcade experience.

A lot like a potato-powered lamp, you can’t help but stare at monster trucks and wonder how anyone could even think of building such a contraption. They defy logic, but are big, loud and powerful enough to attract large crowds, which is good enough for most.

Racing them around isn’t something you would normally see on or off TV for obvious safety reasons, but Microsoft went ahead and built an unlikely 3D arcade game covering the idea. The game was good enough for a sequel, yet Monster Truck Madness 2 is more method than madness. It’s the typical safe approach to a sequel – take the same old game engine, upgrade it with a few new tricks, slap a number on it and you’re off to the bank. While the tracks aren’t as bland as before, some portions could still use some sprucing up.

While MTM2 plays pretty much identically to its predecessor, it does look considerably better courtesy of the 3D accelerated hardware visuals. For instance the engine can pull off a few neat weather and nighttime effects. Each of the game’s eleven tracks can effectively become an entirely new course with the addition of darkness, snow, rain or fog. The occasional “dynamic” element like a passing train or a blimp is interesting, but interactivity is still limited to the thrill of knocking over traffic cones or fellow racers. Along with the tracks we get nine new trucks. This sequel runs a little smoother than its predecessor and the graphics are more detailed.

The driving physics are identical to the first game, which means it still feels like you’re racing indestructible plastic cars on what feels like the moon. The truck configuration options are just as limited as they were in the first game. Winning races is mostly centered on finding shortcuts (the tracks are fairly open-ended) and bumping your opponents off-course and into the mud where they belong.

Unfortunately, the stadium events are now missing. In their place are Summit Rumbles, multiplayer-only arena battles in which you have to butt the other trucks off a hill. It’s an interesting concept, but the main attraction of multiplayer racing are still standard races, mostly on GameRanger – the AI isn’t that much of a thrill to play against. In the end, MTM2 is largely the same as the first game plus an added visual overhaul – it’s cheesy, loud and neck-deep in mud, but also fun to drive around for the same reasons. 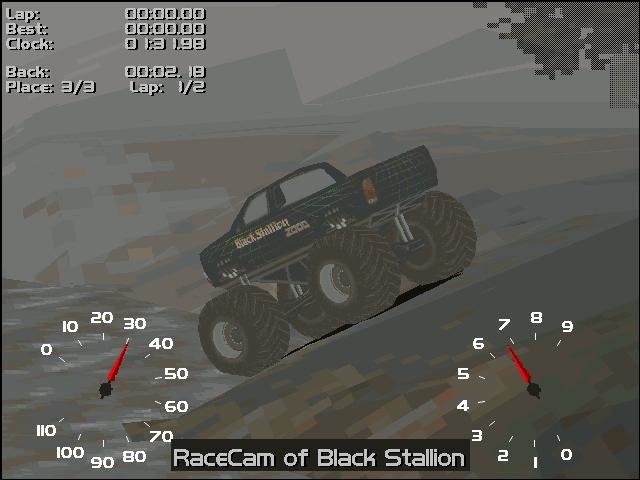