It’s of note how surprisingly easy it is to run this game. Being designed by Microsoft for Windows 95, you’ll find that Monster Truck Madness starts and runs error-free on even more modern Windows platforms without so much as needing a compatibility-mode check. After the hassle-free install and purty intro movie, MTM graces you with three race types – circuit, drag and cross-country rally, and also tournaments (a combination of races in a competitive, point-based format). There’s no campaign mode per se, but the latter tourney mode loosely resembles it.

The game presents a collection of twelve monster trucks, all licensed real-world equivalents that some of you might remember from ESPN (trucks like Bigfoot, Grave Digger, Samson or Snake Bite, just to name a few). There’s some variety to be had, but the cars themselves handle a tad too much alike, as the game itself openly admits (apparently this was done in the interest of promoting more balanced racing). Good controls, but what’s with the camera?

Despite my suspicion, Monster Truck Madness packs some damn good fun as an arcade racer. Playing with the keyboard is straightforward enough, but tires really start burning after you hook up a joystick, gamepad or steering wheel (an easy step considering how well the game communicates with modern peripherals). The controls are responsive and the driving is quite a blast. My one beef with the gameplay are the awkward external camera modes, which never feel quite comfortable. Fortunately, there’s a cockpit view that’s perfect thanks to your truck’s high profile. Add to that the optional side and back views and you can play quite effectively.

Although primarily arcade, a few interesting concepts lightly ground this racer into reality as well. You can customize your car in three areas – tire cuts (to better suit solid or off-road terrain), suspension flexibility and gear transfer (or whether you opt for high speed, better acceleration, or a general compromise between the two). There’s also the physics model that lets you bump into and drag along roadside obstacles or just bounce around precariously as you negotiate rough terrain or high jumps.

Despite the brutal thought of driving a five-tone beast around an uneven road, MTM is surprisingly easy to get into. Out of the three difficulty levels to choose from; the lowest is so pitifully effortless that opponents actually slow down to wait for you in the unlikely event that you fall behind. On Intermediate you have somewhat more competent drivers around you, and the game lets you rev up your car to full speed. The highest difficulty level offers the most amount of challenge and fun. Physics are more realistic, opponents take shortcuts and actually try to win and your garage tinkering takes a more noticeable toll on your performance. Even here, however, the AI blunders too frequently..

A few vital features are missing, including the complete lack of damage modelling both inside and out. It’s virtually impossible to trash your car by driving into things, and haphazardly shifting gears won’t result in an engine blow-out. Simulator junkies won’t find much to kindle their interest here, but anyone else looking for an easy off-roader that handles nicely should apply. Add more points if you find a live opponent to play against. 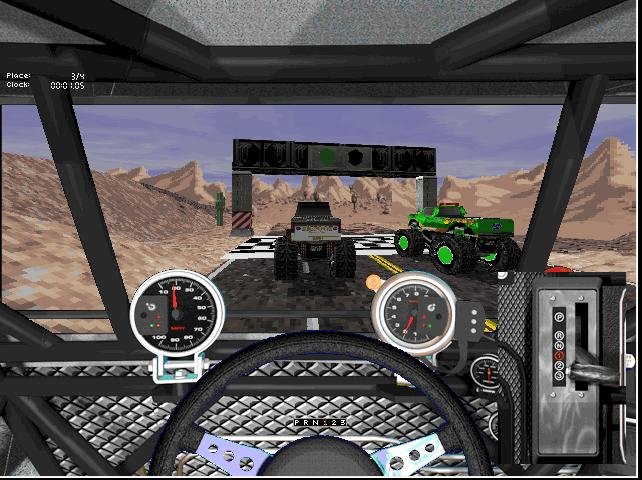