The joke premise behind Deer Avenger is that the hunted fight back. It’s a cartoony hunting game in which a gun-totting deer named Bambo goes out and thins the herd of would-be hunters out to get him. The entire setup exists as a launch pad for one-liners and caricatures. Bambo utters endless witticisms that satirize the most insipid hunting sim elements. For example, on the crude 2D navigation screen, on which gamers scout a map to locate characteristic hunter droppings, such as “nudie magazines” and beer cans.

In essence, Bambo’s goal is to nab seven hunters and mount them in his trophy room. All the basic toys are included; there are three weapons, a compass, binoculars and calls such as “Baywatch is on!” In a creative spasm, the designers also included “gaseous emissions” so gamers can get up-wind and clear ’em out. Do this too much, though, or overuse the calls, and the hunters wise up and decline to emerge. Weapon examples are the M-16 with scope and the slingshot with deer pellets. Locations include Connecticut in the spring, Minnesota in the winter and West Virginia in the fall, but this is moot because the bare-bones environments consist of boring, static horizons and two-dimensional trees.

Once the weapon and location are chosen, there is nothing much to do but listen to Bambo groan about how boring the game is. The 360 degree arena is small, so the compass and binoculars serve no purpose. Do a couple rotations, cut the cheese and call out “Hey! Ted Nugent’s here! Who wants to meet the Nuge?” Soon enough someone will come crawling, and seconds later his head will be hanging in the room. Again, the designers are emphasizing all that is wrong with the genre and depending on the humor to spice things up. Except neither will last very long. 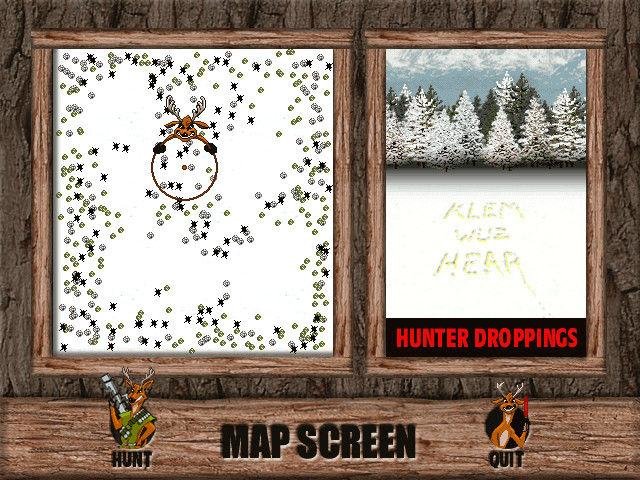