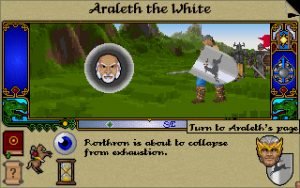 Back in the old Commodore 64 days there were a couple of games called Lords of Midnight and Doomdarkâ€™s Revenge. Both of them would now be forgotten if designer Mike Singleton hadnâ€™t decided to complete his trilogy with what is, essentially, Lords of Midnight 3. But since no one would pick up the third installment in a series theyâ€™ve never heard of, Domark wisely opted to publish it as Lords of Midnight. At its core, the game is a mix of strategy and role-playing.

The world of LOM is pretty large, and you use a map to range across it and direct your allies. This leads to one of LOMâ€™s more interesting ideas — letting you actually play as a number of individual characters, in different areas of the land. See, rather than exploring with a party in first-person, you explore alone in the first-person 3D mode, and send your allies on quests by giving them traveling orders and tasks to perform. You can then jump in at any time, taking over and playing as any of the characters. Youâ€™ll even have different modes of transportation at your disposal, such as flying on the backs of dragons and using boats to travel via water. Sending your men out into the wilderness and seeing them actually traverse the 3D terrain, in this case rendered in voxels, is pretty cool. But the concept falls apart once you realize the game isn’t that well put together. The graphics and sound are outdated and destined for the bargain bin. The interface is cumbersome in the extreme, myriad functions and controls that are unclear or so sloppily implemented that youâ€™ll find the simplest of tasks to be more work than fun.

A larger problem, however, is the terrible character control. Just moving through the game world is almost impossible, thanks to controls that send you spinning in circles and moving in exactly the direction you donâ€™t want to go. Just figuring out how to get around in the damn game becomes more challenging that solving the quest.