This is a crash course designed to get new Kingpin players familiarized with the game. The walkthrough will only cover the first two missions, but will be broad enough that new players should feel right at home with the game. Kingpin is only hard for the first few missions, once you get enough cash and guns. After that, it’s pretty easy. The game is played on the 2nd difficulty setting.

First off, learn that you shouldn’t kill everyone in Kingpin. Holster your weapon and talk to people (always use the positive interaction, as the negative one will get you either nothing or, worse yet, anger the NPC into killing you). Also, after you do kill someone, make sure to crouch and search their body for cash! Getting greens is super important here. T intersection – left to the store and sewers, Right to the storage facility. Drunk guy in the corner.

As you start, you only have a broken pipe. Surviving long enough to get a pistol and shotgun will be your main concern for now. As you start, immediately look behind you – you can brake the wooden fence and will eventually find a secret area.

Head back to the storage facility. Sneak past the two guards when they are distracted listening to the radio, and open the large storage door on the left corner. Kill the foreman and grab the whiskey and flashlight. Giving the whiskey to the drunk will nab you the combination to the safe in this room! You’ll also find the entrance behind the safe to the other storage area, where the condenser coil is located. Pursue at your own risk. Head back at the main road where the Pawn-o-Matic was located. If you follow the other end of the road, you’ll meet up with 4 heavily armed gang members. Get your gun upgraded and yourself healed, and try to take them on. You’ll be able to enter the sewers from there. 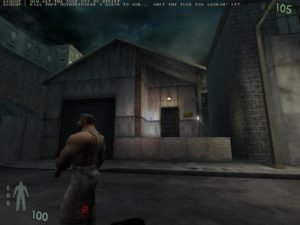 Lamont and the garage with the bike.

The tunnel again splits into two areas. Head straight, and you’ll find Lamont going about and cursing. Lamont also has a watch that you will need to take to the bar called Jax located on this street. Opening the small garage opposite the bar will get two bad guys on you including Lamont, so waste Lamont first, then storm the garage.  A bike inside will be your way out of here, if you can find a blasted Battery for it. Back on the same street is Jax – it costs $10 to get in, and eventually you will need to get in there.

If you’re out of money, backtrack to the tunnel. The other area will lead to a roof – after crossing the flimsy plank connecting the roofs, you’ll find a box. Resist the urge to break the box. Instead pull it (hold USE+Direction Keys) so you can jump on the roof, where you’ll find a cool $25 and some other sweet stuff. Here’s how it should look: Go back to Jax (the bar) and find the bathroom. Give the watch to the fat dude and you’ll get the key to the storeroom. Head back to the roof where you found the $25 – inside the building is the locked door (there’s a Maintenance sign next to it). From here everyone is fair game – shoot ’em good. Eventually you’ll find a boarded up door which you can smash to the next level. 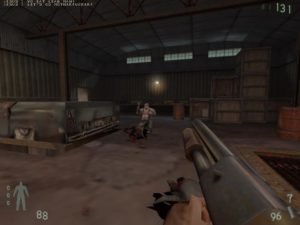 Crucify Jesus with your shotgun.

These pair of levels are pretty straightforward. Just shoot everyone, explore everywhere, pull every switch and eventually you’ll find Jesus. It’s a pretty tough fight – the dogs will be in the way, but you’ll find lots of health pick-ups nearby. After killing Jesus, go outside into his junkyard and perched atop one of his busted cars is the coveted Battery. Now return to the bike and drive off with style. Great job! 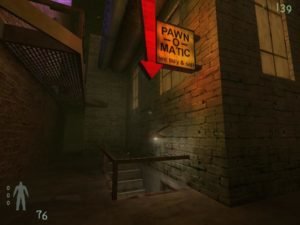 After gearing up, head straight into this dark alley and you’ll access the walkway to the bar above.

Holster your weapon as you start mission 2. You’ll need at least $60 to pass through this mission, so be careful not to go under that threshold. You’ll also be babysitting an NPC whether you want to or not. Make sure to upgrade your pistol or shotgun with the extra dough – there’s a Pawn-o-Matic nearby. After that you’ll need to find Club Swank (it will cost you 10 bucks to get in; if you’re broke, a dead guy nearby will have $20 on him). Louie, the club owner, wants you to break into a warehouse owned by Nikki, and steal some stuff from the office safe. You can also hang around and talk to Louie 4-5 times and he’ll give you a bunch of useful hints, or mingle with the rest of the trash around the bar.

You’ll also find two more fellas here, and you’ll have to hire one of them later to help you open the safe. But first, you should go to the warehouse and clear it out yourself so your help won’t get killed. Be ready for more action. Go back to the area where you started the level, and enter the small tunnel where two mofos are hanging out. Clear them out and use the elevator. 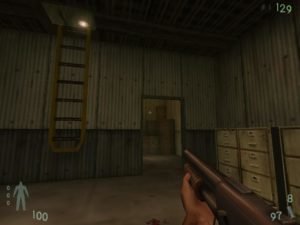 This ladder leads to the secret area.

This warehouse level is confusing as hell, but essentially you have three points of interest (4 if you count the secret area).

1. The elevator access you’ve just used.
2. The office containing the safe.
3. The power switch which electrifies the small fence in the office.
4. The secret area atop the roofs.

You’ll quickly reach your first fork in the road as you find the second ladder, seen above. Going up will reveal a storage space with a hidden air vent – it will lead outside, where a little investigation on the roofs will reveal a broken wall. Hint: only open ammo/weapon crates with the crowbar, since shooting them will destroy their useful contents! Presto – you now have a flamethrower.

After finding the office, you will locate the key. You’ll also meet your first enemy with the tommy gun outside – a great weapon to fight against shotgun goons. Find the door with “Electrical” marked on it, open it and turn off the power to the office facility. 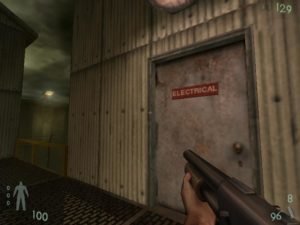 Now go back to the office with the safe, through the ground floor underneath the concrete tunnels – the office facilities will be dark now, so you know you’re close when you see red emergency lights. Use the flashlights around there so you won’t get lost.

Make a mental note where the safe office is located (the concrete tunnels and barrel room are useful to reminders) and go back to the bar to hire an NPC to open the safe. You have two choices – one guy who can lockpick the safe quietly for $200, or another who will blow it up but will spawn enemies for $50. You should probably go with brute force and choose the cheaper explosives guy. Careful you don’t get his stupid ass killed on the way. 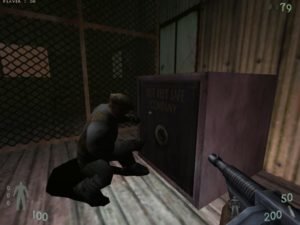 Lead him back to the safe, and SAVE right before entering the room. The AI can get stuck and screw everything up. Carefully lead him into the area with the safe, press the Special Attack key then use the safe. If the guy is right on the safe, he’ll move in to plant the bomb. When he says it’s done, run outside. You’ll get a cool stash of money and some files from the safe, but will now face down a bunch of spawned enemies.

Talk to Louie two more times, until you get the key. Now you have cash and approval to hire his guys near his warehouse, where you started the level. Go around the corner of the Pawn-o-Matic and you’ll face a serious fight near Nikki’s production facility. 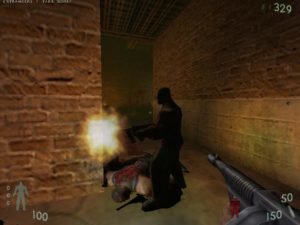 There are a few puzzles here, but they are not too hard. You need to figure out how to raise the bridge that will lead you through the first half of the level. First find hallway vent shaft, which will lead to the storeroom containing the two fuses needed to start the pump. The pump will then fill the large reservoir with goo, and will then empty the other area of goo near the place you entered this level. Remember the dead guy that was shown in the starter cutscene? Without any goo, you can examine his body and find the key. The key, of course, opens the door to the switch that extends the bridge. Figuring out the rest of the level is pretty easy – you shoot everyone standing. Now for the end of mission 2. Defeating Nikki is a bit hard with him packing a flamethrower and all. But if you found the secret flamethrower and fuel in this level, it can be a bit easier. If you can burn him up he’ll be taking damage and won’t be able to fight back, so try your best to ignite him without getting hurt yourself. After he’s ignited, fire smaller jets of fire to keep him roasting good, or switch to any normal weapon. Eventually you’ll see a movie after he runs out of hitpoints, and it’s mission completed.