Bridging the gap between realism and fun. The high-res cockpit of the F-16D.

Jane’s IAF (Israeli Air Force) was developed by Pixel Multimedia. Many of the founding members and their employees were active or retired IAF fighter pilots, so this isn’t your average group of developers. It’s not everyday you can have fighter pilots create combat simulations. The intro itself will leave you excited to take to the skies with the confidence that you’re flying for one very impressive air force. The intro features historical footage and subtext detailing the accomplishments of the real IAF. Some of these feats are pretty amazing. Think of it as a brief history course on the real-world IAF.

The historical campaign missions and aircraft variety is what makes this action-oriented simulation fun to play. They depict the Six-Day War, Yom Kippur War and the Lebanon War. In one of the missions from the Six Day War historical campaign, you find yourself coming to the rescue of a pilot in distress. In another mission you’re to eliminate tanks from crossing the border in your Mirage loaded with rockets.

The very first mission in the Yom Kippur War has you taking off from your airbase as incoming fighters are attacking. Off to the right of the runway a building explodes as you taxi to take-off! They’ve done a superb job at recreating each of the historical scenarios provided, by having designed missions filled with action, drama and a fair amount of challenge, depending on what difficulty setting you choose. There’s also an instant action mode and useful training missions.

There are a great deal of planes that you can take to the skies in IAF – the F-15 Eagle, F-16D, F4E, F4 2000, Lavi ATF, Kfir and Mirage III. Each aircraft features authentic looking cockpit art, but they all share the same simplified modes of operation when it comes to using the A-2-A and A-2-G radar. Some of the aircraft feature two MFDs, others don’t. Many of the cockpit functions, can be manipulated by the mouse, allowing you to bring up the gear, flaps, switch radar ranges, designate targets and turn the auto-pilot on and off with your mouse. The enemy MiG-23 & MiG-29 are actually flyable in multiplayer scenarios as well, a nice bonus. Each of the planes handle well and are a blast to fly, but none of them will appease realism fanatics (the Eagle in IAF, for instance, is not nearly as accurately modeled as the one in Jane’s F-15). They bleed speed and drag and weight affect the flight dynamics, sure, but it’s not 100% accurate, but more along the lines of Jane’s previous mainstream combat simulations like ATF & Fighters Anthology. Again, this product is more about providing action and variety, and hence isn’t meant to be hyper-realistic in any specific area.

But the planes do have noticeable characteristics to tell them apart. The F-4 feels a bit like flying a rhino, where as the high-tech Lavi flies like a rocket, because it’s a high-tech fly-by-wire plane. You’ll also notice a difference in flight modeling between flying the Mirage and the F-15 2000 or the F-16D in the simulation. They’ve done a great job modeling the differences of each aircraft, but they won’t stall as easily as they would if they were modeled as realistically as the F-15E in Jane’s F-15. The planes themselves are superbly rendered, though the outlying terrain looks a little washed out when flying low. The environments might not be as detailed, but it is truly massive. They’ve used stereoscopic satellite imagery and terrain elevation data to model the entire region of Israel and specific areas of the countries bordering Israel. Instead of seeing the same patch of land being tiled over and over again, Jane’s IAF gives you a very accurately modeled virtual playground to fight above… and crash into if catch an enemy missile.

Overall, this game has a lot going for it as far as scale and is also fun to fly. It attempts a wider appeal and sacrifices a good deal of realism in the process, but still manages to retain the fun factor that give these sort of sims their pulse. 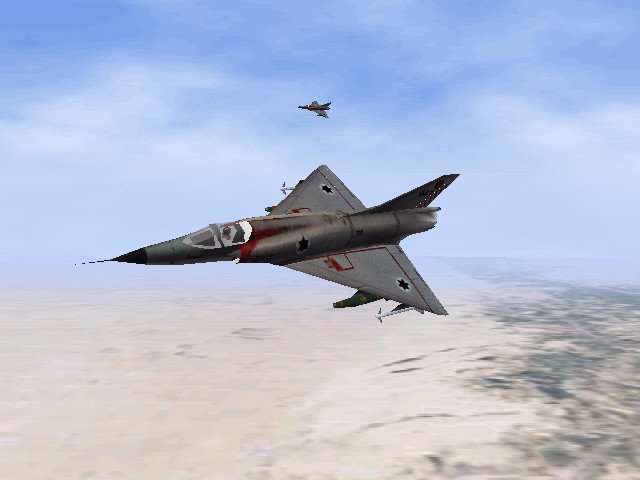