With Fleet Command, Jane’s moves away from the in-the-cockpit simulation genre, putting you instead in the position of Commander of the Fleet. The game gives you control of aircraft carriers, destroyers, cruisers, submarines, and all sorts of aircraft — a vast arsenal of ships and weapons are available for would-be Captains. Although not as realistic as Harpoon, it is more approachable, with a 3D engine and enough fine detail to please cerebral strategy gamers. 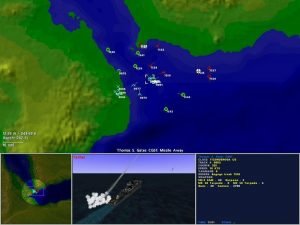 There are four excellent tutorials. Each one takes the player through essential steps to playing the game, and are some of the most thorough tutorials seen in a game of this sort. They are thorough enough to allow you to play the game with only a casual glance at the manual. Jane’s has included over 30 single missions and one campaign consisting of four interrelated scenarios. In the campaign, the first mission is highlighted in blue; the others are grayed out until you successfully complete the first mission. The Carrier Battle Group starts in the Indian Ocean where India is threatening to invade Sri Lanka.

If you survive with a high enough score, you continue to the Strait of Malacca where you face the Chinese and a small Russian fleet; the Taiwan Strait; and the final showdown at the Kuril Islands around Japan where you face a resurgent Red Fleet. After successfully completing each mission, your fleet will resupply, rearm, and be reinforced for the next scenario. As you are reinforced after each mission, losing ships does not seem to affect the next mission in the campaign.

The main game screen, where the action takes place, consists of four views. There is a 2D Map that takes up three-fourths of the screen. In this view you select a platform, issue orders, and follow the action. The view can also be switched with the 3D view. This view works well, making platform selections and issuing of orders easy to do. The 3D window shows a three-dimensional view of the selected platform (plane, ship, submarine, or base). Pressing F9, will switch the 2D Map and 3D Window, allowing you to get a bigger view of critical moments in the mission, such as planes taking off and landing, or following a missile to its target. This view is where all the action takes place in the game.

The game interface is easy to use. A platform is selected by clicking the left button of the mouse over an object. Clicking the right button of the mouse brings up a menu of commands for that platform. It is a simple matter to select and left click on a command. Multiple platforms can also be selected ala Command & Conquer by drawing a box around the craft you wish to select. A simple right click of the mouse then brings up the orders menu for the selected group. There are also a number of hotkeys that help speed up game play and mission orders. 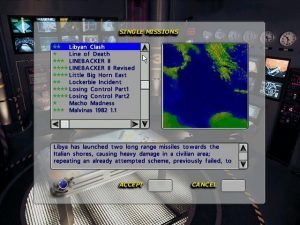 Ships and planes will automatically launch countermeasures when under attack. However, ships will not automatically fire SAM missiles at enemy anti-ship missiles, instead waiting until the last second to fire their close-in weapon systems as the incoming missiles close on the ship. Only if you issue specific fire orders will SAMs be launched at a specific missile. Aircraft react the same way. Aircraft ordered to identify a target will identify it as hostile or neutral and return to patrol. However, if the target is hostile, the aircraft will turn and head for home without firing a shot.

In the real world when aircraft or ships are identified as hostile, friendly ships and planes will automatically fire on the enemy without waiting for orders. This lack of self-preservation is annoying but does not detract seriously from game play. Overall, Fleet Command is a good combination RTT and action game which is fun to play. It may not satisfy the hardcore war gamers, but will appeal to the “beer and pretzels” war and action-strategy gamers alike.