Hype, an action-adventure game published by UbiSoft, is strangely charming. Adults, will appreciate its fairytale theme, and the variety of its challenging puzzles. The game’s medieval fantasy world is populated with characters based on Playmobil toys: that’s right, those plastic toys with painted faces, and no fingers. However, a clever script, great artists, actors and programmers, bring this eccentric conundrum to life.

Hype, as well as being the name of the game, is also the name of its perpetually smiling, cherubic knightâ€”your alter ego. Before he is given the key to unlock the gate to the forest, he must learn how to use his sword, crossbow and magic spells in a valuable training session. The control system for the weapons is not intuitive and needs to be practiced repeatedly.

The story is simple. Hype was turned into stone by Barnak, the Black Knight and zapped into the past. Restored by a good magician, he sets out to find the magic jewels that will allow him to travel back through time. On his journey he must adhere to the knight’s code of honor. A great knight listens to people, knows his kingdom, masters all kinds of magic, and knows when to use it. He seeks out all necessary clues, is financially astute, knows his adversaries weaknesses, must conclude that his combat is just, keeps his armor in perfect condition, and does not seek to fly faster than the wind when he is astride the dragon.

There is much more arcade action in Hype than in other adventure games. Much of the action requires manual dexterity, which won’t bother junior much, but Mom and Dad may find it frustrating. Hype must climb ladders, jump over obstacles, fire off magic spells, swing his sword, and shoot his crossbow bolts. Although it is possible for Hype to run past many of the monsters guarding environments it is often important to fight the monsters to get money, magic or health boosters.

There are no mouse-control option, just gamepad, and keyboard controls. The keyboard is more effective than the gamepad, however, when it comes to racing against the clock. Hype is given the opportunity of trying out a pair of speed boots. He wins a prize if he can complete a race against the clock. Unfortunately, even some of the keyboard controls are awkward to use. Aiming the crossbow is really difficult, involving five too many keys. And it’s just impossible to pick off a moving target. 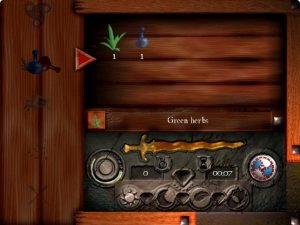 There are also delays between pressing a key and the action, making chasm jumps tricky. Finally, because the “windows” key is between the left CTRL jump button and the “action” space bar, it is all too easy to dump the game to desktop. Fortunately, the game can quickly be restored again, but it is disconcerting. Talking to the villagers is necessary and thankfully non-verbose. However, the conversations are often out of context. You’ll get the same advice before and after you’ve completed a task.

The game includes the dreaded console game version of saving games. There is no quicksave option. Players are often forced to explore the same environment multiple times before they can find a place to save a game. To compound the aggravation, if the player has taken the trouble to clear the area before saving the game, the area is repopulated the next time the player enters the environment.

It’s a shame that these awkward interface features bring down Hype. But despite these problems, the charm and simple wit of the game is almost enough for the average player to forgive and enjoy the game.