In 1999, Relic Entertainmentâ€™s groundbreaking Homeworld took the gaming world by surprise. Still widely regarded as the gold standard of space real-time strategy games, it successfully coupled lush graphics with a sleek interface that made manipulating camera angles and toggling between build and formation menus in 3D space incredibly easy. Homeworld 2 takes the original and upgrades it. With a new game engine, especially during massive battles of all ship classes, you canâ€™t help but admire its finer points, from its lovely dynamic lighting to its chilly â€œrealism.â€

The Homeworld universe is â€œhardâ€ science fiction, as opposed to, say, StarCraft. The large, complex battles it depicts have an austere, clinical feel thatâ€™s more admirable than immersive, regardless of the camera angle. But itâ€™s great hard sci-fi, and the visuals really suck you in â€”literallyâ€”as you zoom in closer like a jeweler with a loupe, and the distant flashes gradually coalesce into thousands of stories unfolding. For a game totally devoid of visible living organisms, Homeworld 2 compensates by making you care about simulated husks of flying machinery. Your people live inside those fragile husks, fly them, die in themâ€”the exhaust trails become their souls. As in Homeworld, you feel for these poor trusting bastards scrounging for asteroids out in the middle of genuine nowhere.

Which is partly what makes much of the martinet story campaign such a bummer. Homeworldâ€™s poignant air of cosmic mystery is largely absent; here everythingâ€™s all grueling puzzle and puzzling grind. Instead of offerings like Homeworldâ€™s wonderfully eerie Garden of Kadesh, the sequel gives you exhausting debacles like the fourth mission, in which doing things in sequence directly opposite from whatâ€™s suggested is not only possible but proves a tenth as ulcerous, and the outright sadistic red herring of the tenth one. Thereâ€™s no let-up, just an overriding sense of attrition and hopelessness as you watch your entire â€œpersistentâ€ fleet get persistently pulverized many times over. Itâ€™s not just the difficulty either, but the logic. The third mission introduces marine frigates, which â€œcaptureâ€ enemy ships in multiplayer, but in single-player only give the misleading impression of being able to do so (including attaching to the ship and displaying a steadily increasing â€œcapture barâ€). Also annoying is the automatic collection of resources. The lack of such an option was, ironically, one of the few valid criticisms leveled at Homeworld. Here, automatic collection occurs the second youâ€™ve completed your mission goals, which entails starting the next level short-handed.

The storyline has its moments, but after Cataclysmâ€™s strange, daring waters, Homeworld 2â€™s scavenger-hunt plotline feels for most of its length like an almost spitefully conventional rehash, top-heavy with extra-galactic ancient races that no longer exist except as convenient plot devices. (The whole thingâ€™s an anthropomorphized riff on David Brinâ€™s Uplift novels, which take space combat imagery to heights Homeworld 2 can only dream of). Your new enemies, the Vaygr, have swanky vertical missile launchers but donâ€™t seem inherently distinct as a culture from your own Hiigarans; they are supposed to represent a â€œconglomeration of races.â€

Homeworldâ€™s interface involved toggling to separate screens for building ships and researching technologies, but there were few options, it never seemed cumbersome. Here the menu takes up a third of the screen, obscuring your view of the luscious space graphics, and you canâ€™t move or shrink it. Hitting R minimizes the research menu, but B doesnâ€™t minimize the build menu. For all their bigness, the menus donâ€™t seem to use their space wisely; it makes you long for the minimalist simplicity of the sensors manager. Many basics feel harder, although you get used to them. You now build the smaller ships in complete squadrons, presumably to make the battles bigger and more spectacular, but clicking on an individual ship gives you the relative health of the entire squadron at the bottom of the screen, which is less precise. Why not an AI setting to have ships auto-dock when theyâ€™re near death? Why canâ€™t collectors auto-repair? Why no patrol? How about being able to assign docked craft to groups? Alt-bandboxing a group of ships that includes hostiles doesnâ€™t show a list of all those selected, as it did in the original and Cataclysm

The beloved formations such as sphere and claw have been abandoned for new, more efficient â€œstrike groups,â€ fleets that can include multiple ship types but move at the speed of their slowest unit. Familiarity with these is a major factor in combat, but the rock-paper-scissors consequences of using each type are barely touched on in the slender manual, itself a mockery of the original gameâ€™s thick, detailed documentation.

For all its clumsy new baggage and rushed feel, Homeworld 2 takes itself seriously, designed from the ground up as a reward to the faithful rather than an olive branch to the casual newcomer. The lucky few up to its Sisyphean challenges will find themselves rewarded for their loyalty. 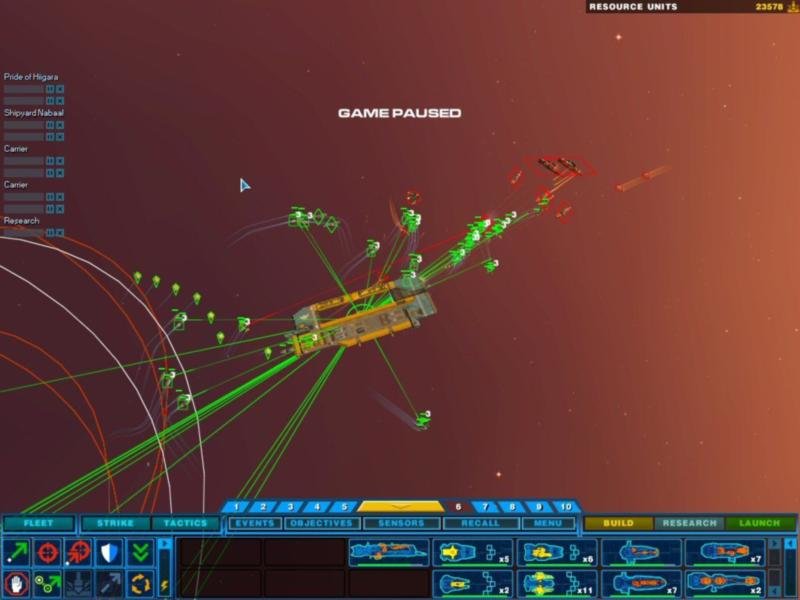