Cool style is not enough to save Hitman.

It’s initially tempting to call Hitman a thinking man’s shooter, but there’s a certain point where you can’t help but ask yourself whether it’s time to turn that troublesome brain off. Perhaps it’s the point early on when you kill the chauffeur of a Hong Kong crime boss, drag the poor sap’s limp body behind a dumpster, steal his clothes to put a bomb in the limo, and no one notices that the small Chinese driver has suddenly been replaced by a really tall, bald white guy with a barcode printed on the back of his head.

Or why everyone in this game is so dog-gone trigger happy, starting with the understandably twitchy Chinese gang members but then continuing to law enforcement and even a hotel security staff who’ll blast your head off the moment you wander inside that staff-only kitchen. Or why you can’t just save the game instead of repeating the same levels endlessly. Alternatively, it’s the myriad of other similar common sense-defying limitations that the game requires you to swallow.

Hitman: Codename 47 might be rough around the edges, but it’s at least dressed in a stylish tuxedo packing some cool visual design and a techno score. The plot doesn’t fare as well. This job turned out a little bloody.

You star as Agent 47, waking up in what looks like a cell in a mental institution. Your real identity is hidden from you, and a disembodied voice (heard from invisible speakers) guides you through the first tutorial mission. No sooner do you complete the training gauntlet that you’re sent off to Hong Kong to take down a stereotypical bunch of Chinese Triad members, then it’s time for some jungle gunplay in South America, then into a ritzy hotel to stop a terrorist bomber, and onward to take down yet another gun smuggler before embarking on the final quest to discover the dark secret of your character’s true identity.

Maybe I shouldn’t have given away so much of the story, but then again there’s not much of a story to give away. Most of the game is business as usual in the business of killing people for cash (which you can use to buy better weapons and ammo), and it’s only towards the end of the game that our hero gets to find out why he’s been branded with a barcode and sent on his globe-trotting killing spree.

Levels look realistic enough for the job, and the characters are very well animated in both life and death. You can drag dead bodies out of the way of prying eyes and their limbs move realistically. The audio work is quite competent with its techno soundtrack, really good sound effects yet sort of bland (and often repetitive) voice acting. The AI is alert to foul play when there are obvious dangers, and guards will sound the alarm if they find a body, hear screams and gunfire, or need assistance. The pathfinding is commendable. The AI has its ups and downs, but can also become remarkably inconsistent at times, like when NPC’s attack you and set off alarms for no clear reason at all.

A Bullet to the Head

Hitman can be played through either force or stealth, neither of which is easy. Some portions of the game, like the jungles of South America, are best played with guns blazing, but the greater part of Hitman requires some stealth to succeed. You’re given a free lease to do anything as long as the job gets done, which might include killing harmless bystanders or guards, stashing their bodies, taking their clothes and going in undercover. A shame the game is plagued by the lack of a savegame feature, turning several missions into timed chores that require you learn the habits of each NPC so as to time that perfect hit without alerting the army around you. Visit Budapest and other faraway places.

For each mission in the game (all twelve of them), there’s generally one way to get it right. Sure, there’s some variation here and there, but basically the challenge is to figure out the proper series of steps that will enable your character to accomplish his grisly goal and get out alive. For instance, a limo that you need to blow up arrives at a specific time, and the crime boss will leave the restaurant to get in the limo at a very specific point after that. So you’ll have to figure out how to get the bomb inside the limo within that time limit, without alerting the guards. Before each mission, you can use earned cash to buy equipment, guns, and ammunition.

Your only alternative to stealth is going all-out ballistic on everyone, but this too is problematic and often ill-advised. Your health and armor points drop to zero pretty fast, with no chance of replenishing either. Your enemies drop weapons which you can’t unload for vital ammunition, but instead must use each one separately. So if you drop one guy with an AK-47, you can grab his rifle, fire it empty, drop it and scavenge for another half-loaded rifle – not fun.

With its graphic, stylized violence and emphasis on stealth and assassination, Hitman seems tailor-suited for the shooter crowd. Unfortunately, it feels as if the developer lavished too much attention on making the violence sleek and realistic and just sort of forgot about polishing the gameplay. Hitman is ultimately an odd mishmash of style, pretty graphics, and stupidity; altogether a resounding thud for an otherwise great gaming franchise. 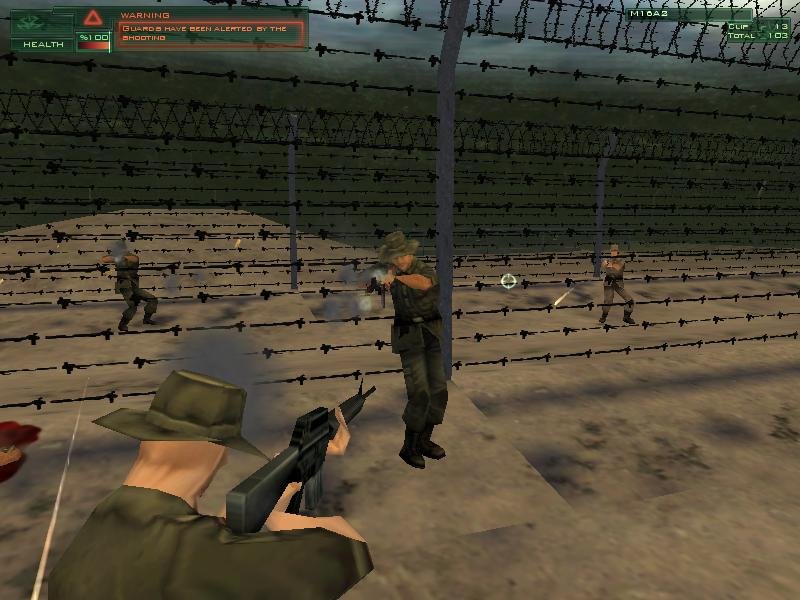