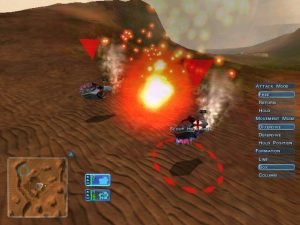 Calling Ground Control a real-time strategy game is at once appropriate and wide of the mark. Sierra’s computer game takes “real-time” to the extreme, creating a challenging combat experience that can be regarded as either exhilarating or frustrating, depending on your predisposition. On the other hand, there is little true “strategy” in the game. In a continuum marked by “strategy” at one end and “tactics” at the other, Ground Control resides almost completely at the tactical end.

It has only a few slight nods to the “strategy” side, such as being able to pick and outfit your unit types prior to a mission. With no resource collection or unit production, the point of Ground Control is to complete mission objectives using a fixed number of squadrons. Orders are given at the squadron level, and your command choices are limited to setting formations, directing targeting, telling squadrons when to use special weaponry and abilities, andâ€”most importantlyâ€”coordinating maneuvers to bring maximum firepower to bear on weaknesses in enemy armor without exposing your troops to friendly fire.

As a tactical exercise, Ground Control is phenomenal, creating a sense of realism and of bonding with your units that is rare in RTS gaming, and this realism is augmented by outstanding 3D graphics and sound. For some gamers, Ground Control’s strengths will be its drawbacks: the difficulty of many missions in the two campaigns is high, and because you cannot reinforce and there are no in-mission saves, you are compelled to execute perfectly or begin again, a trying proposition in the longer missions. First among Ground Control’s triumphs is the 3D graphics, a move that was common for many real-time strategy games around the year 2000. It’s also more than just window dressing – you’re given full control of the camera, and can zoom right into the action or plan everything from a bird’s eye view. You can treat yourself to a close-up view of the action â€” shell casings flying, dust kicked up by armor units, tracks left in the ground, muzzle flash, and excellent explosions and energy effects. Unlike other 3D RTS games, the camera never becomes a serious obstacle.

Before each mission, you are shown a topographical map, informed of probable resistance, and given an opportunity to refit your squadrons. Once you start the mission, your command vehicle and squadrons will be inserted via dropshipâ€”sometimes you’ll have a choice where. In early missions there is one dropship, and you’ll have to proceed with only three or four squadrons. As the campaigns progress, you’ll have more dropshipsâ€”up to threeâ€”and more choices of unit types to load. The most military squadrons you’ll need to command at once is twelve.

On the ground, your job is to take advantage of superior tactics, taking stealth, the terrain, and friendly fire into account. Units have widely varying view ranges, with scouts boasting the most, and large tanks and artillery the least. This forces you to keep your most vulnerable units alive, both to sniff out enemy traps and to serve as spotters for your big guns. Fortunately, it is possible to avoid your enemy’s field of view by using the terrainâ€”hiding behind hills and in canyonsâ€”and by hiding in shadows and foliage.

The 3D terrain is also crucial once combat has begun. You have a natural advantage when firing on units below, and infantry occupying the hills and ridges that are inaccessible to armor units can fire down on them in relative safety. Terrain is also key in avoiding friendly fire, an oxymoron which occurs when you move one of your attacking squadrons in front of another one and take a round or three in the butt. Much of the game therefore involves a tactical dance in which you pin enemy units between squadrons, engaging them from the front and flanking to take advantage of their weakly-armored backsides, all without accidentally getting caught in your own crossfire.

All orders are given at the squadron level, and in addition to movement and targeting commands, your primary concern it to select an appropriate formation. You can also set the attack and movement postures, which tell your squadrons how to react if they take enemy fire. By keeping your command limited to the squadron level, Ground Control avoids becoming unwieldy. Each squadron is automatically hotkeyed to the function keys, and once you’ve got your squadrons arrayed in an intelligent battle-line, they do a competent job of selecting targets and defending themselves. This leaves you free to concentrate on reacting to enemy movements, using secondary weaponry, or moving squadrons to take advantage of enemy weaknesses. One of the greatest blows to the game is an inability to save, which cranks up the difficulty a lot. These issues will ruin Ground Control for gamers who aren’t interested in the tactical ballet of the battlefield or in being repeatedly put through an unforgiving performance exam, but it is hard to be overly critical of these characteristics because Ground Control works so well as a whole. Once you have mastered formations, tactics, and combined arms, you feel a much greater sense of accomplishment for having succeeded in winning without concessions.

As you move on to offensive missions, and as you master reconnaissance and artillery, you will notice the AI is locked into scripts that leave it vulnerable to long-range attack. So long as enemy units can’t see you, they carry on as usual, even if you are pounding them with artillery. They unfortunately don’t have the sense to target their own artillery on the location from which you are firing, or to rush that location with armor units. This shortcoming is only obvious in missions in which you are assaulting enemy fortifications, because when you are on the defensive, the AI is very effective. The lack of dynamic AI is probably the reason the game doesn’t have a skirmish mode, a disappointing omission.

Most RTS games take a dumbed down, point and click “Kill everything to win” approach to combat. You do a lot of killin’ in Ground Control, but here you also have to employ solid tactics to win the day. Combined with a surprisingly streamlined camera and combat system, the game offers the type of action that can’t be matched by any two-dimensional counterpart.