This glossy sequel to Volition’s Freespace: The Great War sets itself apart with epic battles, a story-driven campaign and non-stop action in deep. The story in FS2 follows the remnants of Terran-Vasudan civilization as it faces an open rebellion on one side and the Shivan armada on the other. Colossal battles and spectacular explosions ensue. Explosions are a lot more spectacular.

Ironically, the story seems pretty tattered and all over the place in this sequel, possible leaving way for a sequel to eventually clear things up (which of course never happened). There are lots of loose ends should you pay any attention to the narrative, but the greatest focus remains squarely centered on the action, which shines remarkably. The game takes place over three decades after the defeat of the Shivan capital ship “Lucifer,” which marked the end of the Great War. The sub-space gate to Earth was destroyed and the survivors of the war have been cut off, but have learned to cope and rebuild society.

The plot is less “by-the-numbers” than what you find in most games, and develops throughout missions as the pilots talk among themselves and with commanding officers. Even more interesting is the way that the missions develop away from the bare outlines given in the pre-mission briefings. Missions usually get much complex than the mere objectives you were assigned, and most of them are extremely exciting.

From a technical perspective, not much has changed. FreeSpace 2 uses a marginally improved version of the original 3D engine, with a focus on more impressive lighting and weapon effects. The enhancements in the game’s engine work well with the new focus on plot and mission developments. While the ships aren’t much more advanced graphically, the engine can now accommodate more in a battle – and that includes huge capital and support ships. Indeed, the biggest craft in this game is ten times bigger than FreeSpace’s biggest super destroyer. On top of that, as a fighter pilot, you seldom actually engage these huge ships. Wings of bombers are occasionally sent in to annihilate them, and you have a choice of either commanding them or partaking in the bombing run yourself, but many times they blast it among themselves. Seeing two of these monster ships blast each other into pieces is quite awe inspiring, and the impressive beam cannons that they use (alongside anti-fighter guns to repel pesky ships such as yourself) are both devastating and spectacular.

Another major new addition are nebulaeâ€”these huge gas clouds enshroud you with an eerie, claustrophobic fog. Beyond impressive visuals, the nebulae create an interesting layer to the gameplay as well. They affect ship sensors so enemies at long range won’t show up, and at medium range they will simply be vague intermediate blips on the radar. When a contact gets into close range, systems will analyze it normally, and the effect has let mission designers do things like hide capital ships in a cloud, revealing them at the very last moment. As the game progresses, you’ll end up flying quite a few missions in these space clouds, and the lack of reliable sensors, combined with the sometimes-fretful chatter of wingmen creates a surprising sense of tension.

The actual gameplay in FreeSpace 2 is exceptional. With an expansive set of controls, Volition has done a solid job of making sure that the commands are still easy to get into. Despite having a full array of system control options, all the main controls are intuitive and in easy reach, and the HUD is completely customizable. At the same time you’ll have to master somewhere around half of a standard keyboard to really achieve optimum combat performance. The game controls flawlessly with both a mouse or standard joystick, depending on what you’re comfortable with (I’ve aced this game with a wireless mouse in no time). Engaging a cruiser in Gamma Draconis.

Fans of the original will see a lot of updated versions of the older weapons and ships, and even some technology from the first game. All told, there are over seventy ships of various sorts and twenty weapons, including a keen tagging missile that allows capital ships to lock onto your targets, in addition to the usual barrage of guns and missiles. Both allied and enemy AI is pretty impressive as well. On the harder difficulty levels, the game is extremely challenging, and you’ll see some very good combat skills displayed by both your own wingmen and the enemy. You can command wingmen, though they can hold their own ground.

Freespace 2 is certainly one of the best space combat games out there, and fans of the original will love the enhancements this sequel offers. Ironically, it’s still difficult to recommend this one over the original for newcomers to the series, since they are so closely tied together. Regardless, the emphasis on story and involving missions, combined with great visuals, audio, and exceptional control make this a top-notch game. 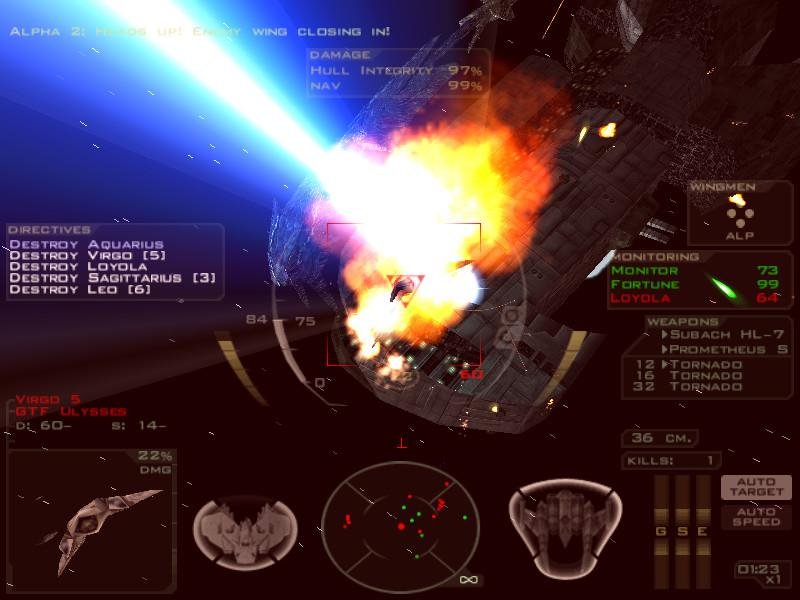