One thing common among all NovaLogic flight sims is the general sense of having seen all of it before. Whether we’re flying the F-22 or the Soviet Mig-29, we’re greeted with largely the same interface, flight mechanics, mission design and action-packed feel that places the game somewhere  between flight sim and shooter territory. So is the case with their F-16 sim, which is basically a somewhat refined F-22 Raptor aimed at beginner pilots who want the thrills of flying an F-16 jet without the unavoidable weeks needed to learn a hardcore flight sim like Falcon 4.0.

Indeed, it barely takes twenty minutes or so of flipping through the manual to learn the basics, and most of that is spent memorizing the panel and HUD layout of the Falcon. Peek into the quick missions menu and you’ll find all the necesary intro assignments teaching you the basics on flying, landing, bombing and air-to-air combat. If you’ve ever played a jet fighter game from NovaLogic, you know what you’re in for, yet this doesn’t make it a bad game. Far from it, but It does raise questions on why they went to such troubles forging an alliance with aerospace giant Lockheed-Martin and their fighter division. In theory, one would expect that such an alliance would allow them an edge at trying to capture the feel and behavior of a real jet fighter in their following sims-or at least capture the feel of one of Lockheed’s own fighters. Not stopping there, NovaLogic even brought on a couple of the original test pilots as consultants and dropped coy hints about the new levels of authenticity their games were going to achieve. Unfortunately, their endeavor was short of ground breaking.

The experts’ input shines best when you consider the avionics suite and cockpit interiors, which are remarkably detailed for what is essentially a highly technical action game. This is really quite impressive for an entry-level sim. The F-16 has a surprisingly sophisticated LANTIRN and MFD menu, and players actually learn a streamlined interpretation of operating the LANTIRN pod, designating and lasing targets for smart munitions. An authentic heads-up display is featured and almost all of the panel instruments are functional and allow you to zoom in on them.

But when it comes to weapons, things are a really mixed bag. On one hand, there is a respectable attempt to represent air-to-ground guided weapons, particularly on the plane’s good LANTIRN implementation. However, the missiles and guns are pretty laughable. For example, F-16’s passive AGM-88 anti-radiation missiles absolutely require turning your radar on to get a lock on anything other than a pre-programmed target, while radar-guided mid-range missiles work just fine even when the radar is shut down. Air-to-air or SAM missiles are virtually unspoofable, fly rather slowly, and can nearly pull U-turns chasing after their targets. Spotting and dodging incoming missiles isn’t easy, and the controls take a back seat here to a top-right automap that tracks these threats around you. It’s a completely artificial construct, toggled with the F11 key. Part of the action takes place in Yugoslavia.

The gun itself fires at a ridiculously slow rate, is incorrectly angled far above the centerline in the Falcon, and the bullets appear to be only affected by gravity when flying right-side up and diving at ground targets. In fact, not only does the ammo practically last forever, it’s unfathomably powerful, too. Players may find that all those fancy bombs are simply redundant. Just switch to guns and blaze away as vehicles, water towers, office buildings, and yes, even those annoying hardened targets all crumble under your volley of fire. To its credit, getting close and personal with this gun is tremendously fun and requires skilled flying.

The fact is simply that these games are not “simulations for the masses” at all, but arcade shooters with jetfighter wrappings. For action junkies looking for a large quantity of missions and gameplay requiring some technical considerations it is very good – simple, easy to learn but challenging to master in the long run. At the end of it all it’s pretty good fun, especially if you can play it in co-op multiplayer with another friend. 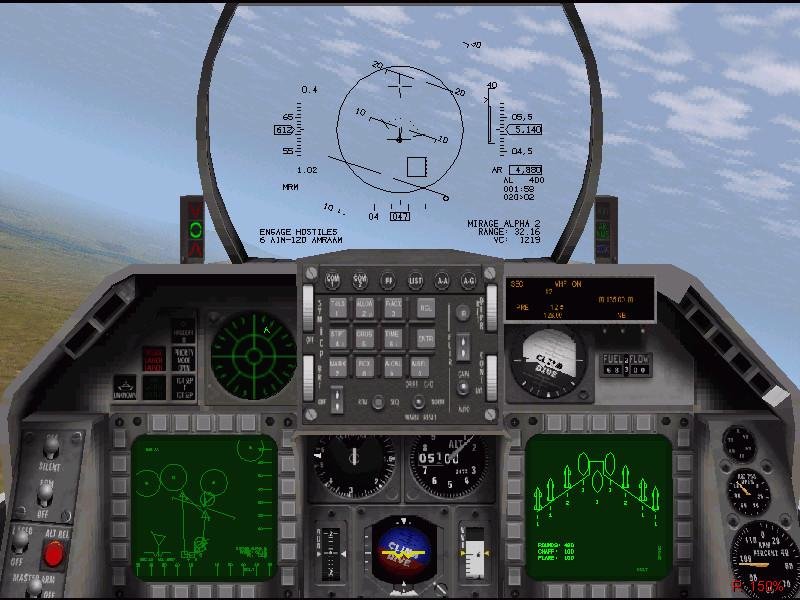