A worthy sequel to Star Trail. Shadows Over Riva picks up where Star Trail left off, after your party rescues the Salamander Stone and forges a tentative peace between the Elves and the Dwarves. Hearing of some mysterious goings-on in the port town of Riva, your party travels there to see whatâ€™s up. You start the game in the Temple of Travia, where you can decide whether to create a new party, or use the default party already set up.

True to the previous Realms of Arkania games, Riva contains a gripping story line, including many sub-quests. Because all the action takes place in Riva, thereâ€™s no need to use an overhead travel map, which means you donâ€™t have to worry about those annoying little things like shoes wearing out halfway to a destination, or a party member becoming sick on the journey. Everything happens in a local area, which keeps the plot going at a steady pace. For the first part of the game, you only enter combat a couple of times, and the rest of the time you explore new areas, meet new characters, and uncover new secrets. In Riva, youâ€™ve got a ton of stats on each character. At the beginning of the game, you can choose to play in Novice or Advanced mode, which means you either handle the skill increases yourself, or let the computer do the dirty work. At every step, the computer can take over the handling of the numbers from you, which is a welcome relief for those who donâ€™t like number-crunching. For those who like to configure their characters exactly to their liking, however, thereâ€™s plenty of room to play.

Creating characters itself is a huge part of getting into the game. In advanced mode, it could easily take a few hours to create a party of six characters, with all the rolls, tweaking, and level increases to make them battle-worthy. But thatâ€™s what a true role-playing game is all about. Based on Das Schwarz Auge, Germanyâ€™s best-selling role-playing game system, Riva contains most elements of the hugely detailed system. The interface in Riva is very similar to Star Trail – although the graphics of the first-person perspective have drastically improved. The textures are nice, varying largely from the city of Riva to the underground dwellings, such as the sewers and Dwarven mines. The automap works great, and gives you the ability to make notes at any location for future reference. However, it no longer allows you to jump from one explored location to another, which makes traveling through Riva a long process.

As an RPG, Shadows Over Riva is true to the die-hard fans of this genre, so expect an engrossing, time-consuming and complex role-playing adventure from start to finish. 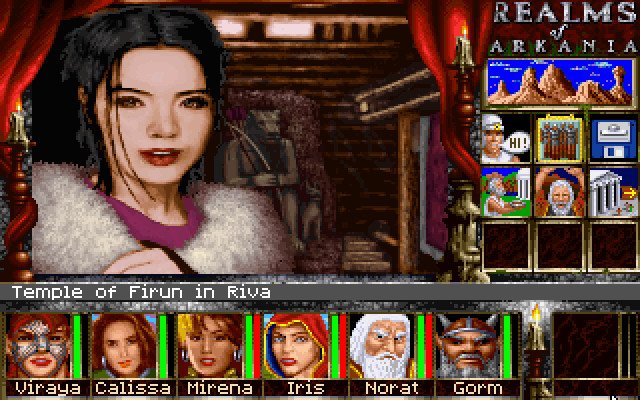