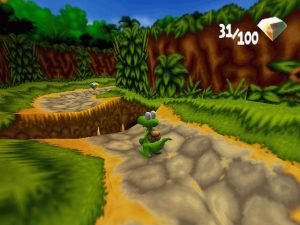 A croc of mediocrity.

The storyline in Croc 2 goes like this: after saving the benevolent King Rufus from the evil Baron Dante in the original Croc, our cuddly hero sets out on a quest to find his true parents. Unfortunately, Baron Dante has been brought back from the flaming pits of hell to wreak havoc on the Gobbos, an adorable race of creatures. Croc must save his friends by traversing through the mysterious worlds of four Gobbo tribes, besting Dante’s followers by knocking them over with a playful tail-whip.

Croc has a few new moves; he can execute a triple jump, swing from monkey bars, or go for a ride on balloons. Gameplay consists of a lot of platform jumping, enemy-bopping, and crate-breaking. Though there’s more emphasis on object manipulation this time around, the platforming remains a bit on the stale side anyone who’s played through the marvelous Banjo-Kazooie or Mario 64 will feel that something’s missing. Every 3D platforming cliche has been represented – Croc 2’s got your ice level, your lava level, your water level, ad infinitum. Expect to spend a lot of time with the mine cart stages, which are frustrating to the point of being unfair.

The game’s hub-based system makes for some non-linear exploration, and you can head back to previously completed levels to discover new areas. This is done via the purchase of Gummi Savers. Croc can jump on three awesome flavors of Gummi Savers to reach higher locations. No, this isn’t a shameless advertising plug – it’s just a way for gamers all over the world to know about the wild juicy taste of Gummi Savers.

Croc 2 looks a bit better than the original game, with more organic-looking environments and better animation effects. Unfortunately, the game’s forty levels are still obscured by a layer of fog, and the longest draw distance still feels limiting. The camera system has also been improved, and does a good job of tracking Croc, though you may have to fiddle with the angles in certain cases.

Though 3D platformers are usually a single-player experience, Croc 2 features OmniPlay, where two players can control Croc simultaneously. OmniPlay sounds better in theory than in practice. Each player is given control of a certain action, be it jumping, attacking, or side-stepping. This just does not work, especially when you’re attempting to do two moves simultaneously.