Counter-Strike is a prime example of gamers that know what the hell they want out of their shooters. The original CS goes way back as a simple multiplayer mod for Half-Life created by a handful of guys, and the formula was so good that later versions merely tweaked and bettered an already highly popular tactical shooter. The simple premise – two teams, simple objectives, a handful of deadly guns and huge maps – gave players an incentive to work together as a unit to dominate the opposition.

A gold mine was created, Valve officially picked up the game and new releases came out at a steady pace. But it was only with Counter-Stike: Source that Valve finally dropped the aging Half-Life engine for a more modern technical overhaul of their classic shooter. CSS isn’t a sequel to Counter-Strike, but rather a remake. The weapons are almost identical with a few slight tweaks, the map layouts are the same but with higher details, and even the gameplay is centered a lot on classic game types like Hostage Rescue and Defuse.

Valve has taken a large selection of the maps from Counter-Strike 1.6 – Assault, Dust, Office, Havana, Italy, Aztec, Chateau, Cobble, Piranesi and recreated them with great detail using the Source engine. In addition, the levels are scattered with objects that react realistically with the Source engine’s physics engine. Much like in Half-Life 2, shooting at objects will send them flying, brake them or otherwise have them react more realistically to projectiles. The water effects are better than ever and shooting through glass leave small bullet holes you can see through. A far cry from the first Half-Life graphics.

More importantly, Counter-Strike Source has kept the huge level of customization that made previous versions so popular. You can replace weapon skins, tweak with the stats more freely, add new maps, change sounds and models – the possibilities are seemingly limitless. Out-of-the-box bots are another feature, but they were only half-heartedly implemented. On the brighter side they will auto-generate waypoints for new maps, which is a huge relief, and can make for nice shooting practice. You can force them to buy only one type of weapon, or no weapon at all ( for really frantic gameplay, have ten knife-wielding bots charge you! ). Why carry just one Desert Eagle? 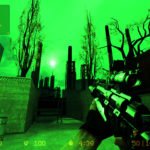 But overall the bots aren’t as polished or clever as CS 1.6’s excellent (not to mention free) PodBot. Terrorists have an annoying habit of charging out of their base and leaving hostages undefended. Both teams always attack as a single unit, and there’s simply no AI tweak to have them disperse now and then for more varied gameplay. And while the difficulty is adjustable, even the easiest level can be a little bit too much for players with all weapons enabled. Overall, the bots make good practice targets, but poor replacements for human players.