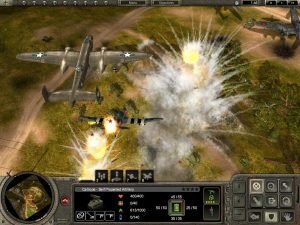 Take traditional real-time strategy combat, graft onto it the small unit tactics of the old Close Combat games, add a campaign system not unlike that of Panzer General, and you have a good idea what to expect from Codename Panzers Phase Ones. Like many great games that take the best of what came before to create something new, it combines familiar elements with strong presentation and some truly great visuals to become a role model for World War 2 action strategy gaming.

Panzers takes place all across a superbly rendered European countryside. Urban settings are just as impressive, with almost every building both accessible to your troops and able to be destroyed by heavy guns. This provides a lot of cool gameplay, where submachine gun teams go toe-to-toe in an occupied villa while artillery tries to knock the building down around their heads. When stuff blows up, it blows up real good too. Tanks send bits of metal flying in all directions. Men are sent reeling by explosions and buildings crash down in a cloud of dust.

The excellent presentation supports the gameplay. In the German campaign, winding your way through the main characterâ€™s diary of the war. The game does a great job of following history here while it maintains the real-time tactical gameplay. Anti-tank guns are dangerous to just about any tank but squads of machine gunners backed up by medics are a lethal counter to those stationary targets.

Panzersâ€™ missions emphasize information gathering. Proper use of the Recon planes at your disposal that can give you a major leg up on what to expect. The missions are linear, and while you may not know necessarily what will come next (there are hidden objectives you can also uncover), you can usually predict the path you need to take across the map. That gripe carries over to the AI, which in most missions basically waits for you to arrive. The only other negative is a tendency for traffic jams with too many units moving together. Amazingly, the AIâ€™s generic play doesnâ€™t affect enjoyment much at all. The real-world balance of weaponry and careful tactics make the missions fun. Depending on the difficulty level, you receive replacements for lost units before a new mission, and thereâ€™s a setting where you only get those replacements through earning prestige. A dead unit is gone for good on Hard. On the Normal setting, you still feel the hurt because lost units lose the experience and bonuses they earned during each mission but at least you can throw some more rookies on the front line. Conservation is always key.

Thereâ€™s no one feature of Codename: Panzers that sets it apart from all the real-time strategy games before it. But the game contains all the right things that came before mixed in a World War II setting to create a game that sits among the best in its genre. With no resource management other than the need to win with as little loss of man and machine as possible, this game has great focus.